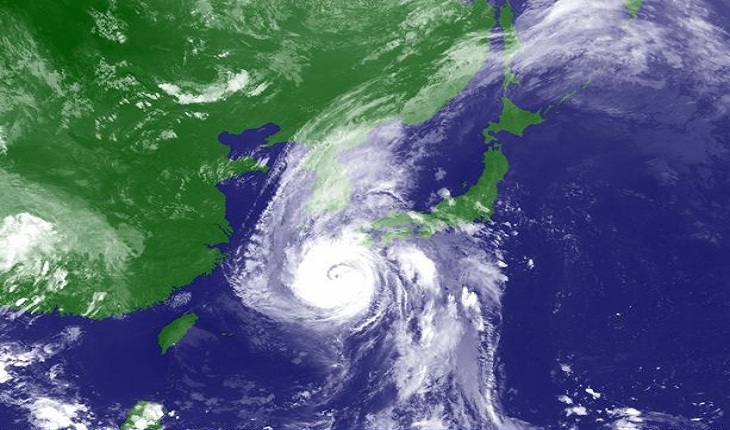 Initial reports on Monday morning indicated that the storm had done less damage than expected, though hundreds of thousands of homes were left without power across most of Japan 's southern island of Kyushu.

At 7 a.m., the typhoon was 30 kilometers (about 20 miles) north of the island of Tsushima and was rated as a "big" and powerful "storm, weakening overnight, but still packing up to 216 kilometers (135 miles ) per hour.

According to national broadcaster NHK, several dozen mostly minor injuries have been reported, most of them the elderly who have suffered falls.

In Nagasaki's Goto, four people were injured in the early hours of Monday morning, a local fire department official told AFP after a broken window hurled glass into an evacuation centre.

"It was unclear whether a rafter of wind or something that crashed through the window was smashing in," he said.

Weather officials had warned that the strongest gusts of the storm would be strong enough to overturn vehicles and break powerline poles.

At the height of the storm, officials issued non-compulsory evacuation warnings and lower-level advisories for over seven million people.

But they also asked residents to avoid crowding at shelters to reduce the risk of coronavirus infections.

Some shelters were forced to turn people away to have enough space to maintain social distancing, and many of those advised to evacuate decided to check into hotels.

Hotel Polaris in Shibushi city, Kagoshima, said all 73 of its rooms were booked out for the weekend -- the first time it had been fully booked during a typhoon.

"This is a large building for our area. I think our guests have chosen to stay with us to feel safe," front desk employee Takayuki Shinmura told AFP.

But with little sign of significant damage early Monday morning, travel was expected to resume quickly.

Japan's typhoon season usually runs until October and Haishen is the second powerful storm to move through the region in recent weeks.

It follows Typhoon Maysak, which also hit Japan before moving into South and North Korea, where heavy damage was reported.

Kim Jong Un appeared in state media over the weekend to inspect the damage and ordered 12,000 elite members of his ruling party to help with recovery efforts.

Two survivors and the body of a third crew member were found before Haishen's arrival forced the coast guard to suspend the search.

"We are assessing the situation including exactly when we can resume the operation," a coast guard duty officer told AFP on Monday.

Typhoon kills at least 9 in Japan