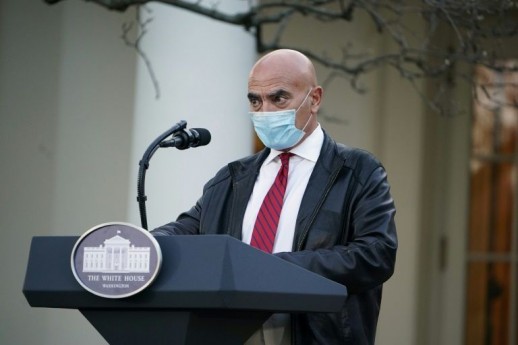 The US hopes to have immunized 100 million people against Covid-19 by the end of February, a top official said Wednesday, which is approximately 40 percent of the country's adult population.

The push should start within weeks, when vaccines developed by Pfizer-BioNTech and Moderna-NIH are expected to be approved.

Each of these require two doses, the second after three weeks and four weeks, respectively.

"Between mid-December, and the end of February, we will have potentially immunized 100 million people," Moncef Slaoui, scientific advisor to the government's Operation Warp Speed (OWS) program, told reporters.

This, he continued, would cover the "at-risk" population comprising the elderly, health care workers and first responders.

There will be an "ample" amount of vaccine to immunize three million residents of long-term care facilities in December, said the former pharmaceutical executive, who was recruited by the administration of President Donald Trump in spring.

The rest of the first tranche would be enough to reach the bulk of health care workers, if states and other territories agree with federal recommendations to prioritize this population.

As production of the two vaccines expands, 20 million will be reached in December, 30 million in January and 50 million in February, making 100 million total.

This figure, however, excludes other vaccines by Johnson & Johnson and AstraZeneca-Oxford that are in the late stages of development.

Slaoui said both could produce their results between the end of December and mid-January, paving the way for emergency approval by February if the US Food and Drug Administration (FDA) gives the green light.

Slaoui added that the AstraZeneca-Oxford vaccine might be evaluated solely on the basis of a large US clinical trial involving 15,000 people, and not with data from Britain and Brazil where the data has been marred by a dosage issue.

While the Pfizer-BioNTech vaccine was approved by Britain on Wednesday, the process is slower and more public in the US.

The FDA won't grant an emergency use authorization (EUA) before a public meeting of an advisory committee is held on December 10. For the Moderna vaccine, a similar meeting will occur on December 17.

Officials say that the logistics have been put in place to start distributing the vaccines, if approved, almost right away.

Right now he is expecting to deliver the first doses on December 15.