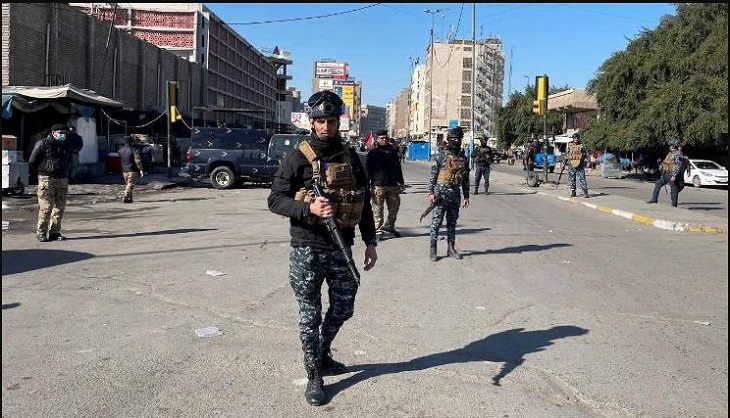 Twin suicide bombs rocked a busy market in central Baghdad on Thursday morning, killing at least 32 people and injuring 110 others, according to officials and state media.

Security forces say they pursued the two attackers before they blew themselves up. It was the first suicide attack to strike Baghdad in nearly two years.

The first bomber entered the marketplace and, pretending to be sick, asked for help, causing people to gather around him before he blew himself up, according to officials and state media. The second bomber then drove to the scene on a motorbike before detonating his explosive vest.
No group has claimed responsibility for the attack, though it bears the hallmarks of Sunni jihadi groups who have carried out numerous similar attacks in Iraq. Double bombings were common in the country during the height of its sectarian war between 2005 and 2007.

"The twin terrorist bombings against the safe citizens of Baghdad at this time confirm the attempts and endeavors by dark groups to target the national needs and aspirations of the Iraqi people for a peaceful future," Iraqi President Barham Salih said in a tweet. "We stand firmly against these rogue attempts to destabilize our country," he added.

A US embassy in Baghdad statement called the attack "a reprehensible act of cowardice that underscores the dangers of terrorism that millions of Iraqis continue to face."

"We extend our condolences to the families of these victims, and hope for the swift recovery of those who were injured," said the statement on the US embassy in Baghdad's Facebook page.

The United Nations Assistance Mission for Iraq (UNAMI) also condemned the bombing. "Such a despicable act will not weaken Iraq's march towards stability and prosperity," UNAMI said in a statement on its Facebook page. "Our sincere condolences to the families of the deceased, and we wish the injured a speedy recovery."

Iraqi Prime Minister Mustafa al-Kadhimi has held an emergency meeting with top security officers at the Baghdad Operations Command headquarters. Kadhimi, who is backed by the US, is also the Commander in Chief of the Iraqi armed forces.

Despite seeing a decrease in violence in recent years, Iraq continues to host numerous armed groups.
Iraq's Iran-backed armed groups have been accused of regularly mounting attacks against US positions, namely the US embassy, over the last year, leading to rising tensions in a country grappling with a coronavirus outbreak and economic turmoil.

Pope Francis is set to travel to Iraq for a three-day trip this March. He plans to visit Baghdad as well as other parts of the country linked to biblical sites, such as the plains of Ur and Nineveh.