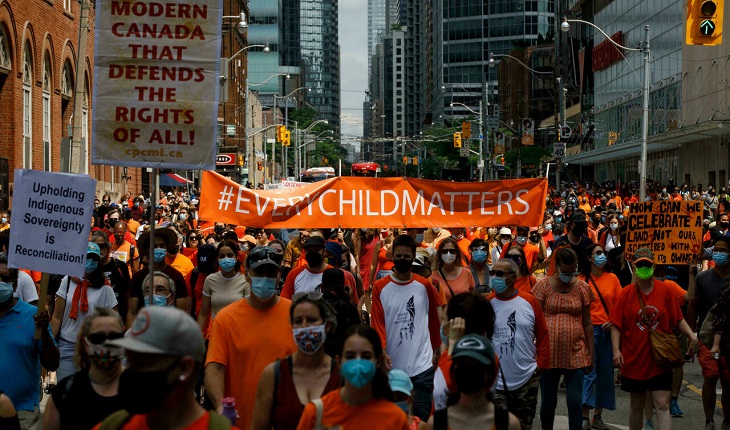 The western Canadian Penelakut Tribe says it has found more than 160 unmarked graves near the site of a former indigenous boarding school, Canada's fourth discovery of this kind in recent weeks.

In the last month, discoveries of more than 1,000 graves prompted a nationwide reckoning over Canada's painful past and its policies of forced assimilation toward indigenous communities.

"We are at another point in time where we must face the trauma because of these acts of genocide," said Penelakut Tribe Chief Joan Brown in a July 8 statement confirming "160+ undocumented and unmarked graves" newly uncovered on the British Columbia reservation.

"It's the tip of the iceberg," said Bob Chamberlin, former vice president of the Union of British Columbia Indian Chiefs. Chamberlin estimates dozens of other unmarked graves have not yet been found.

"My heart breaks for the Penelakut Tribe and for all the indigenous communities across the country," Canadian Prime Minister Justin Trudeau told reporters Tuesday.

"We cannot bring back those who were lost, but we can and we will continue to tell the truth, just like we will continue to work in partnership with indigenous peoples to fight discrimination and systemic racism with real, concrete actions," Trudeau added.

The indigenous boarding school on Penelakut Island, west of Vancouver, enrolled indigenous students from the end of the 19th century to 1975.

The discovery comes shortly after three other gravesites were uncovered across Canada. In June, human remains of about 215 indigenous children were found in British Columbia's Kamloops, followed by 715 unmarked graves in Saskatchewan's Marieval and 182 in Cranbrook, located in southeastern British Columbia.

Each discovery revives a history of trauma experienced by about 150,000 indigenous children, who as students were cut off from their family, language, and culture. Until 1990, indigenous children were subject to forced enrollment in 139 boarding schools nationwide.

Many enrollees endured poor treatment or sexual abuse, and more than 4,000 died on school grounds, according to an investigative commission that concluded the Canadian government engaged in "cultural genocide."

In 2008, Prime Minister Stephen Harper issued an apology on behalf of the Canadian people for indigenous boarding schools.