The Russian and Syrian Presidents discussed fight against terrorism, topics of humanitarian and economic cooperation 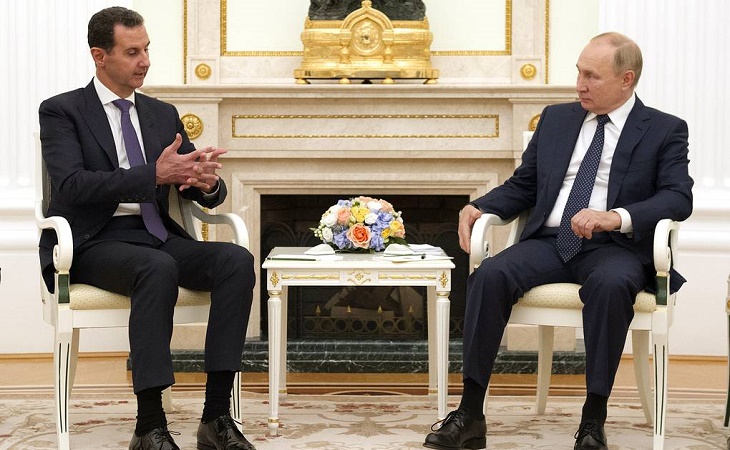 Russian President Vladimir Putin had a meeting with his Syrian counterpart Bashar al-Assad at the Kremlin where they discussed the political situation in Syria, international terrorism as well as issues of bilateral and humanitarian cooperation. The details about the meeting held on September 13 were published on the Russian leader’s website on Tuesday.

In the beginning of the talks, Putin said that he is glad to welcome Assad in Moscow and congratulated him on the occasion of his birthday on September 11 and for the "very good result at the presidential elections" which were held on May 26 and were won by Assad with more than 95% support.

Situation in Syria
The Russian leader recalled that through the joint efforts the two countries managed to liberate the majority of Syrian territories from terrorists (as the Syrian government currently controls more than 90% of the country), while refugees actively return to liberated areas and people are rebuilding their homes. According to Putin, Assad is actively working to improve dialogue with his political opponents. The Russian leader voiced hope that this process would continue.

At the same time, Putin slammed the presence of foreign troops in several regions in Syria without a UN decision or Assad’s permission as a problem as, he believes, it prevents the country from "undertaking best efforts for the country’s consolidation."

In turn, Assad underlined that political meetings and talks held in Sochi and Nur-Sultan had particularly facilitated the normalization in Syria. "I would like to highlight the fact that the political processes which we used to carry out stopped approximately three years ago. There are certain reasons behind it. There are some states who do everything possible to destructively affect the opportunity to organize political processes," the Syrian leader emphasized.

He once again underlined that Russia made a large contribution to the victory over terrorists in Syria, thanking Putin for the assistance provided and also praising the Russian Foreign Ministry. According to Assad, the actions of two countries generally "made a huge contribution to the cause of protecting the whole humanity" from terrorism.

Russia-Syria cooperation
The leaders of Russia and Syria also paid great attention to the topic of humanitarian cooperation and the joint fight against COVID-19. Putin recalled that Russia’s Sputnik V and Sputnik Light had been delivered to Syria. Assad also thanked the Russian president for support, "be it medicine that helps us to treat or prevent the spread of the coronavirus infection or the other help, including food and everything necessary that was provided by Russia to Syria."

Moreover, the presidents talked about the bilateral economic cooperation. "In the first half of 2021, the trade volume increased by 3.5 times," Putin said in this regard.

Putin-Assad meetings
Putin and Assad previously spoke in November 2020 via videoconference due to the COVID-19 pandemic. The parties then discussed the fight against terrorism and resettlement of refugees. Putin last visited the country in January 2020. Moreover, the presidents also often speak on the phone.