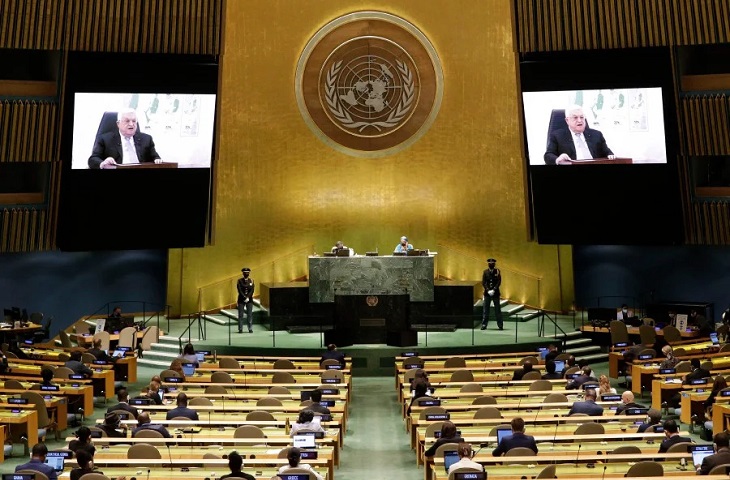 Palestinian leader Mahmud Abbas gave Israel one year to withdraw from occupied territory Friday or he said he would no long recognize the Jewish state based on pre-1967 borders.

In a virtual address to the United Nations General Assembly, Abbas called on Secretary-General Antonio Guterres to "convene an international peace conference."

But along with that request he also issued an ultimatum.

"We must state that Israel, the occupying power, has one year to withdraw from the Palestinian territory it occupied in 1967, including East Jerusalem," he said.

Abbas added that the Palestinians were ready "to work throughout the year" on solving the final status of the states of Israel and Palestine "in accordance with United Nations resolutions."

But "if this is not achieved, why maintain recognition of Israel based on the 1967 borders?" he said.

Abbas added that the Palestinians would also go to the International Court of Justice "on the issue of the legality of the occupation of the land of the Palestinian state."

The peace process to achieve a two-state solution between in the Middle East has been deadlocked for years.

Abbas "proved once again that he is no longer relevant," said the Israeli ambassador to the UN, Gilad Erdan.

"Those who truly support peace and negotiations do not threaten delusional ultimatums from the UN platform as he did in his speech," he added.