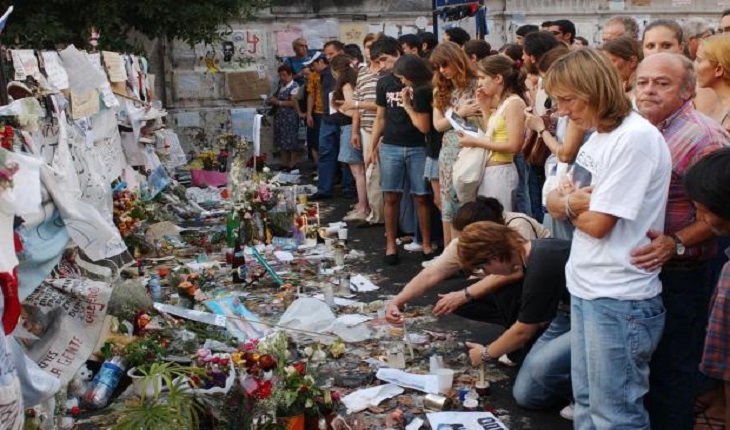 A Brazilian court convicted four people for their role in a nightclub fire that left 242 people dead nearly a decade ago, handing down sentences of up to 22 years.

The 2013 fire at the nightclub in the southern town of Santa Maria started when members of a musical band playing that night lit flares that set fire to the ceiling.

Two owners of the Kiss night club and two members of the Gurizada Fandangueira band were found guilty of murder and attempted murder of the victims, mostly young university students.

Judge Orlando Faccini delivered the verdict on the tenth day of an emotional trial held in Porto Alegre, the capital of the state of Rio Grande do Sul.

"The defendants' culpability is high... this much life was not taken away by chance," he said.

The four spent several months in detention before being freed while awaiting trial.

Along with a seven-member jury, the judge heard the testimony of 14 survivors, 19 witnesses and the four defendants.

"The last time I ran, it was to save myself from death," Kelen Giovana Leite Ferreira, a survivor of the tragedy who had a part of her right leg amputated, told the court.

Devalni Rosso, another survivor, showed the jury her back and arms covered with scars from the fire, which burned 50 percent of her body.

In the indictment, the prosecution argued that the defendants acted with "possible criminal intent," meaning they took the risk of this outcome, even if they did not intend for it to happen.

That strategy resulted in longer sentences, as the victims' families and survivors had hoped.

A police investigation concluded the fire started when sparks from a flare lit by the musicians ignited the insulating material of the club's ceiling, releasing lethal fumes and turning the venue into a death trap.

While some burned to death, many of the mostly young victims died from asphyxiation.

A probe found the venue had no functioning fire extinguishers, only two doors for evacuating people from an overcrowded dance floor, and poor emergency signage.