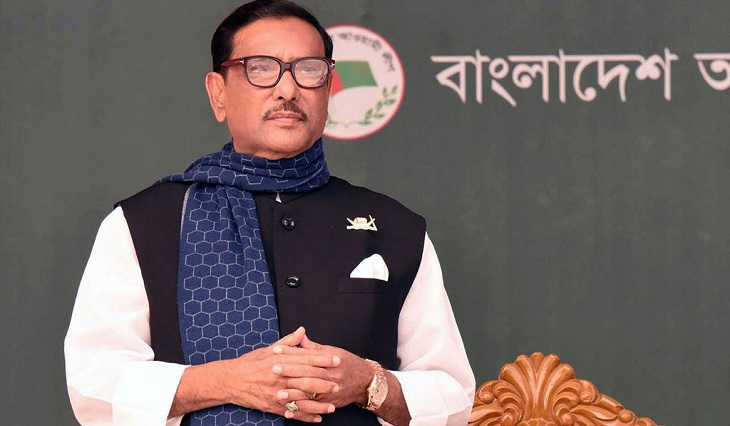 Awami League General Secretary Obaidul Quader today said although the BNP is champion in snatching the rights of people, it is now raising voice about human rights.

“There is no similarity between the words and works of BNP leaders. They talk about public opinion but they do not have the courage to test public opinion – they fear joining elections,” he said in a statement.

Despite winning in the general election, the BNP secretary general did not join the parliament, which is a clear cheating with public opinion, he said, adding that although the BNP leaders talk about democracy, they bear autocratic and anti-state spirit in their minds in disguise of democracy.

Urging the country’s people to remain alert about the inconsistent statements, propaganda and ill-politics of the BNP leaders, Quader said the BNP leaders claimed that the ruling Awami League has been isolated from people since 1971, which is a nonsense talk.

He said all the great things of the country were achieved under the leadership of Awami League, a party that led in the country’s liberation war in 1971 and the 1952 Language Movement.

On the other hand, he said, the BNP is the evil force which started politics in the country by grabbing the state power and destroying the spirit of the great Liberation War.

“The BNP along with the communal forces is still involved in anti-state conspiracies,” the AL general secretary said, adding: “Since its birth, the BNP has been isolated from people. The intrigue is its political tool.”

He said the BNP leaders are telling imaginary tales in media to hide their frustration but these stories do not touch the hearts of the people.

The AL is the organisation of commoners and they are the main power of the party, Quader said, adding that the country’s people have full trust in and support to the AL.

He said there has been a remarkable progress in the lifestyle of the people under the leadership of Prime Minister Sheikh Hasina and in continuation of this, socioeconomic and political progress of the commoners are being achieved.

But, Quader said, the BNP leaders are talking about the false tales of oppression on people, while the AL never believes in the politics of vengeance and repression.

He said the country’s people know better the BNP’s political history of killing, conspiracy and repression as the party has the history of grabbing state power kidnapping people at gun point.

The BNP resorted to killing-rape, looting-arson, repression, terrorism and militancy after assuming power in 2001, the AL general secretary said.

He said about 21,000 AL leaders and workers were killed by BNP’s terrorists and the BNP carried out heinous grenade attack on the AL’s rally on August 21 in 2004.