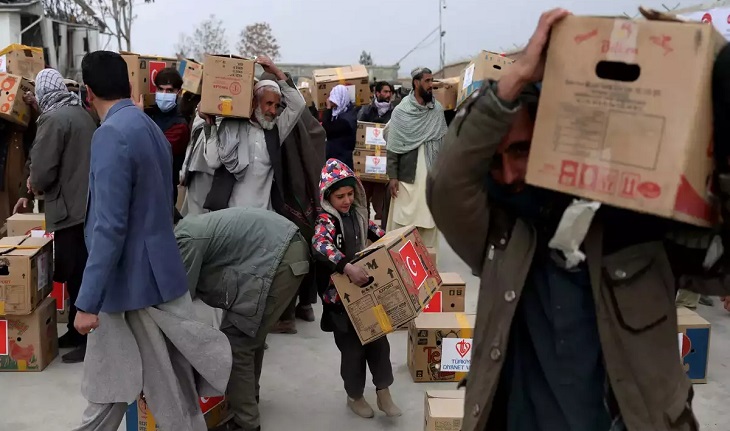 Afghan businessman Shoaib Barak is struggling to pay his workers and suppliers, unable to access funds from a banking system crippled by the freezing of the nation's overseas assets.

They, in turn, can't pay their bills -- and so the country's economic woes trickle down and hurt everyone along an unbroken chain of misery.

"I feel very ashamed," said Barak, who until recently employed some 200 people across the country -- mostly in his construction business.

"For me, for every Afghan, it's really disgusting. I do not even have the ability to pay salaries for my staff."

To avoid giving the Taliban access to Afghanistan's reserves, Washington froze an estimated $10 billion held by the central bank abroad after the hardline Islamists seized power on August 15.

Equating to around half what the country's economy produced last year, that move in turn starved banks used by Afghan businesses and citizens of access to dollars.

Even if limited funds were released, the bulk could be tied up in the American legal system for years while subject to claims by victims of the September 11, 2001, Al-Qaeda attacks on the US.

Ordinarily, the reserves could be dipped into to pay overdue government bills and development projects, but the freeze has trickled down to the rest of the economy.

"If you have a problem with... the Taliban, don't take revenge on the nation, the people."

- Currency plunged -
Barak's cash flow crisis illustrates the problems faced by tens of thousands of Afghans who simply can't access most of their money.

He says he has around $3 million tied up in Afghan banks -- money earned over the years from lucrative private and government contracts, which were paid in dollars as aid poured into the public purse under the pre-Taliban regime.

But with local banks limiting weekly withdrawals to five percent of a business account's balance -- up to a maximum of $5,000 -- Barak is months behind on both invoices and salaries to his staff.

Ahmad Zia is one of them.

The 55-year-old engineer was earning 60,000 Afghanis per month -- equivalent to $770 before the Taliban took over and the currency plunged 25 percent.

Four months later, Zia is struggling to make ends meet and fears his once comfortably-off family of six will only "eat one or two times" per day.

It isn't just Barak's employees who are suffering.

"The kids went to a very good school," he told AFP, noting proudly that his nine-year-old daughter Rana topped her year.

But now he can't afford the right medicine for an epileptic son, and Rana has been expelled because the family can't pay school fees.

- Running out of food -
The misery trickles down even further -- to the Maroof family maid, who is now jobless.

Gulha, 42, earned 8,000 Afghanis a month and was the main breadwinner in her seven-strong family.

Now she is two months behind on rent and running out of food.

"I have 14 kilogrammes (30 pounds) of rice, 20-21 kilogrammes of flour and some oil," she told AFP in a one-room apartment where she allows neighbours to share the nightly warmth of a wood-burner as winter descends.

Once that is gone she will join millions of her compatriots who are utterly dependent on aid.

The United Nations Security Council on Wednesday unanimously adopted a US resolution to help humanitarian aid reach desperate Afghans while seeking to keep funds out of Taliban hands -- a move welcomed by the Islamists as a "good step".

But whether enough cash arrives to contain the unfolding humanitarian disaster ultimately still depends on "the viability of the banking system", said Hanna Luchnikava-Schorsch, Principal Asia Pacific economist at IHS Markit. Many Afghan banks are "pretty close to collapse", she told AFP, and overseas institutions will probably be "terrified" of falling foul of sanctions despite the UN resolution.

For many ordinary Afghans, any relief will come too late.

"Who do you think will be blamed -- the Taliban, or the US?"

Bangladesh agrees to co-deploy troops with Gambia in peacekeeping mission