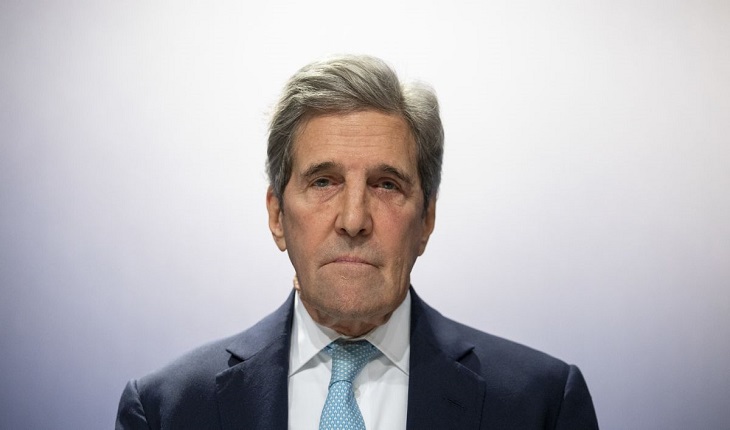 US Special Presidential Envoy for Climate John Kerry applauded Bangladesh for its ambitious climate change adaptation and mitigation initiatives despite being traditionally an insignificant emitter.

While appreciating Dhaka for its climate actions and goals, Kerry also urges to join several US climate initiatives so that Bangladesh can set a positive example for other large emitters and encourage them to meaningfully participate in the global climate process.

He thanked Bangladesh for its ambitious Nationally Determined Contribution (NDC) submitted last year before COP26 in Glasgow and requested for further ambitions ahead of COP27 in Sharm El Sheikh in November this year.

He also assured support of the US government in terms of finding ways to implement the NDC goals.

He promised US support for Bangladesh's energy security, clean energy and energy access goals, including through the Clean EDGE Asia Initiative.

He mentioned that the US State Department's Bureau of Energy Resources looks forward to establishing a new partnership between the Power Grid Company of Bangladesh and Pacific Northwest Laboratory to improve operations and planning to ensure grid stability and reliability to support increased use of renewables; and scheduling a date to launch new collaboration on carbon capture, utilization and storage and blue hydrogen development with Petrobangla.

Kerry appreciated Bangladesh for being the first country in South Asia to join the Agriculture Innovation Mission for Climate (AIM4C), a US-led initiative that put forward robust innovation investment commitments that can help to acquire USD 8 billion worth of climate finance by COP 27.

He also thanked Bangladesh for the commitment made at the Our Ocean Conference in April 2022, including harnessing marine resources sustainability under Blue Economy for inclusive development and the announcement of the National Plan of Action for IUU Fishing.

Earlier on 12 October 2022, Foreign Minister Momen wrote a letter to Kerry informing Bangladesh's decision to join Global Methane Pledge, a US and EU-led joint initiative to curb global methane emission by on average at least 30 percent from 2020 levels by 2030.

Momen reminded Kerry of the latter's assurance of supporting Bangladesh with critical technologies to mitigate any adverse effects on the productivity in the agriculture and livestock sectors for reducing methane emissions.

Kerry: Israel, Egypt pushed US before deal to 'bomb Iran'