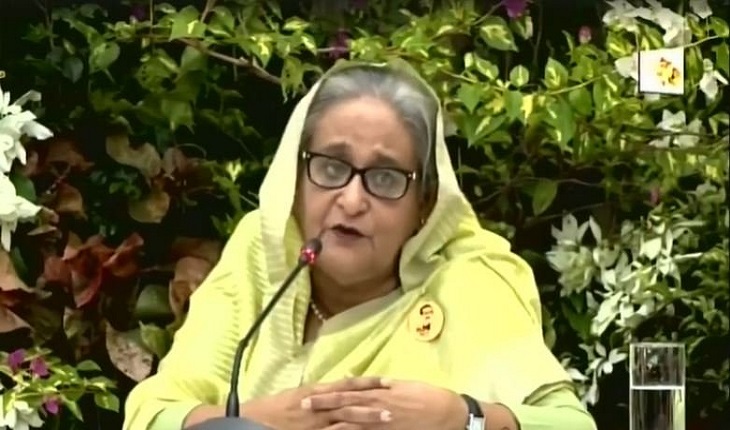 Prime Minister Sheikh Hasina yesterday described the adoption of the "Dhaka-Glasgow Declaration" in the COP26 conference as an outcome of playing a leading role by Bangladesh in the climate diplomacy.

"I believe that the "Dhaka-Glasgow Declaration" adopted by the heads of the government and state of the most 48 climate vulnerable countries led by Bangladesh in the just-concluded COP26 Summit (the 26th session of the Conference of the Parties) was an outcome of the leading role played by our country in climate diplomacy," she said.

The prime minister said this in a press conference arranged to brief media about her 14-day official visit to the United Kingdom and France.

Sheikh Hasina said major feat of the COP26 is that heads of the state and government of the world agreed to further accelerate the climate funding process including allocation of $100 billion every year keeping consistency with Paris Agreement and Sustainable Development Goals (SDGs).

A total of 141 countries including Bangladesh pledged to check all kinds of deforestation move by 2030, she added.

Noting that UK-based news agency – BBC – in its recent report selected her as one of the five deal-makers of COP26, Sheikh Hasina said: “I feel honour to this end considering the achievements of Bangladesh’s growing economic capacity and the people’s trust in our Moral Foreign Policy.”

Highlighting her visit details, the premier said she returned home in the morning on November 14 last after the end of her two-week visit to the United Kingdom, France, and Glasgow, Scotland, the venue of the United Nations COP26.

The prime minister said she attended six multilateral and five bilateral meetings in the main part of COP26 World Leaders’ Summit and side events on two-days.

She said in the post-Covid world, as the incumbent Chair of the Climate Vulnerable Forum-CVF, an organization of 48 countries, her participation in the COP26 was very important for protecting the interests of Bangladesh and CVF member countries.

On the first day of the conference on November 1, as a CVF-Chair she joined a function titled ‘The CVF-Commonwealth High-Level Panel Discussion’ jointly arranged by Bangladesh and Commonwealth as the chief guest.

At the event, the premier said, she suggested building effective partnership between the Commonwealth and CVF.

In the afternoon on that day, she delivered speech in the main event of COP26 World Leaders’ Summit presenting the expectations and demands of Bangladesh in the presence of heads of state and government of the world.

In her speech, she mentioned that Bangladesh is one of the vulnerable countries due to climate change though Bangladesh has liability of only 0.47 percent in global carbon emission.

As the CVF chair, Sheikh Hasina presented the efforts for building a Climate Emergency Pact before the world leaders.

In her speech, she placed a five-point proposal urging global leaders to work together.

These are-- the major emitters must submit ambitious NDCs, and implement those, developed countries should fulfil their commitments of providing 100 billion dollars annually with a 50:50 balance between adaptation and mitigation, ensuring entrance of most vulnerable countries to eco-friendly advanced technology, the development needs of the CVF countries also need to be considered, the issue of loss and damage must be addressed and working together to resolve the climate refugee problem created due to climate change and building a livable world for the future generation.

After the summit, she attended a roundtable titled “Action and Solidarity - The Critical Decade” at the invitation of British Prime Minister Boris Johnson.

Around 30 heads of the state and government joined the meeting.

Sheikh Hasina said she focused on the steps taken by Bangladesh in facing climate change challenge and what kinds of decisions should be taken in the COP26 to implement the goals of Paris Agreement.

In the afternoon, Bill and Melinda Gates Foundation Co-Chair Bill Gates called on her.