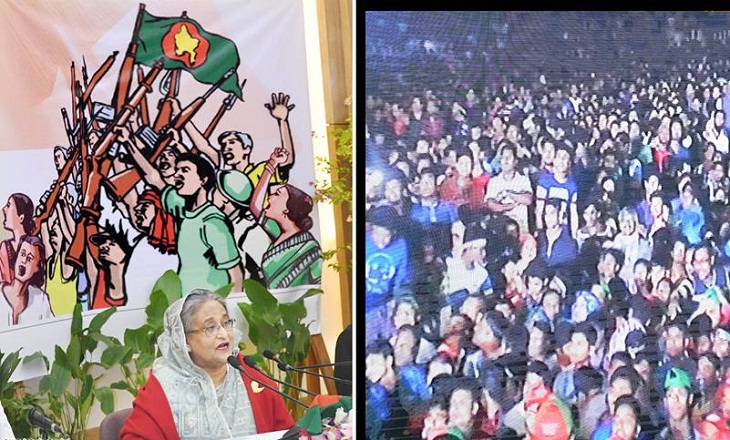 Prime Minister Sheikh Hasina yesterday urged the youth folk to build up them as worthy citizens of the country being imbued with the Liberation War spirit and 1971 martyrs sacrificial attitude.

"You have to be emboldened with the spirit of the Liberation War and sacrificial mentality of the martyrs to build yourself and the country," she said while addressing a jubilant audience of a cultural programme at Suharawardy Uddyan, organized this evening to celebrate 47th Victory Day. Cultural Affairs ministry staged the programme with Shilpakala Academy supports while Sheikh Hasina addressed it through video conferencing from her Gonobhabaan residence.

The premier also talked to a freedom fighter, a daughter of freedom fighter, a male and a female student to know about their feelings on the great Victory Day while her principal secretary Dr Kamal Abdul Naser conducted the interactive programme.

"We have to always remember that we are a victorious nation, we never bow our head to anybody, and we would live in the world with dignity keeping our head high . . . On the great Victory day we have to take oath in this regard," she said.

Expressing her immense pleasure for the countrywide celebration of the Victory Day amid much enthusiasm and festivity the Prime Minister said "we have to work so that people of Bangladesh can celebrate the day for ages to come and it's my expectation from you on this day".

"Inshalla we will build a nation as dreamt by the Father of the Nation by 2021 and Bangladesh would be a middle incoming country and by 2041 it will be developed one . (and) Bangladesh would celebrate the golden jubilee of independence as a hunger a poverty free nation," she said.

Recalling her personal memories of the Victory Day in 1971, the Prime Minister said despite Bangladesh's victory on Dec 16, 1971, she was in Pakistani captivity in Dhaka along with family members for one more day.

"There were jubilant slogans - Joy Bangla -- all over, but we were still in captivity in a house at Dhanmandi's Road No 18 . . . it took one more day for us to be freed" with Pakistani soldiers outside guarding the house, she said.

Bangabandhu was in captivity in Pakistan while two of her brothers Sheikh Kamal and Sheikh Jamal were in war on that day.

"The Pakistani soldiers guarding the house looked frightened but arrogant . . . visibly they were unaware of the surrender even on that morning of December 17," she said.

Sheikh Hasina expressed her hatred to them who had created elements like 'razakar' and 'albadr' to foil the independence saying those evil forces conceded defeat in the war, and "now they are totally unacceptable to the people of Bangladesh".

The premier said the young generation is now motivated with the spirit of Liberation War and so they are celebrating the Victory Day with much enthusiasm with whole nation.

"The spirit should be kept upheld to materialize the dream of the martyrs," she said.

The nation is observing the Martyred Intellectuals Day