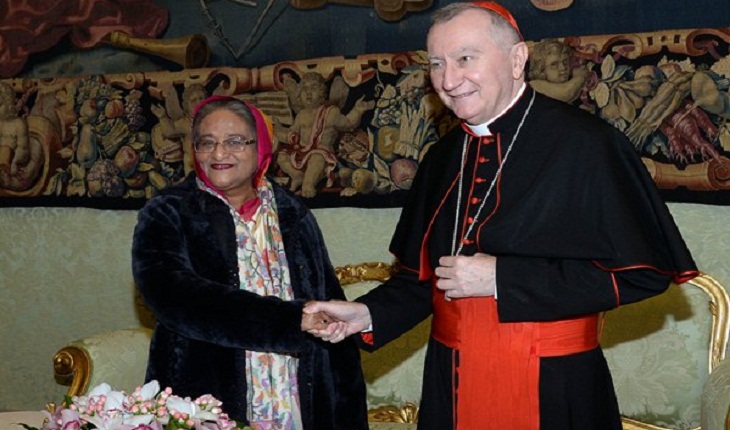 Prime Minister Sheikh Hasina yesterday reiterated her call to the international community, including Vatican City, to keep up pressure on Myanmar so that it is forced to take back its nationals from Bangladesh.

In a meeting with Secretary of State of Vatican City Cardinal Pietro Parolin, the premier said the root of the problem lies in Myanmar, so the solution has to be found in Myanmar.

Shamim Ahsan said the Prime Minister informed the Vatican City Secretary of State that Bangladesh and Myanmar signed an agreement for repatriation of more than one million Rohingyas to their homeland Myanmar.

"The problem has been created by other side of the border and the solution of this problem is also in there. That's why the responsibility for the implementation of the deal is more by Myanmar. But, we are yet to get that kind of response from Myanmar," she said.

Sheikh Hasina said that the process of the repatriation of the Rohingyas has to be started. "Such a situation will have to be created by Myanmar so that the Rohingyas are encouraged to go back to their homeland…this responsibility has to be taken by the Myanmar government," she said.

In this connection, the Prime Minister again pointed out her five-point proposal that she had placed in the United Nations General Assembly (UNGA) last year.

She also said the report of the Kofi Annan Commission is yet to be implemented by the Myanmar side.

The Vatican City Secretary of State highly appreciated the Bangladesh government for its strides to combat militancy and terrorism.

The premier said there should not be any reason for killing people in the name of religion.

She also reaffirmed her government firm stance not to allow Bangladesh's soil to be used for terrorist and militant acts against other countries.

While talking about the Holey Artisan Attack on July 1 in 2016, the Prime Minister said the government has become very much aware of recurrence of such incidents.

"We've contained militancy and terrorism with iron hands and dismantled all the camps of militants in the country," she said.

Sheikh Hasina said terrorists could not continue their evil acts without support of the people and added that mass people have now been conscious against such social menaces following anti-terrorism campaign of her government.

Pietro Parolin highly appreciated the move of the Bangladesh government, saying "That is the right way."

About the meeting of the Prime Minister with Pope Francis, the Foreign Secretary said Pope Francis highly appreciated Prime Minister Sheikh Hasina for sheltering over one million Rohingyas, saying that Bangladesh has now become an example to follow for its humanitarian role.

Pope was very critical against some countries, including the USA, for not hosting the refugees, Haque said, adding that he termed Rohingya issue as very important in this regard.

The Foreign Secretary mentioned that Pope Francis also lauded the existing religious harmony in Bangladesh and said Bangladesh has been recognised worldwide as a country of humanity and communal harmony. He said the top leader of the Catholic community wanted to know about how the Rohingyas would be repatriated to their homeland with safety and sustainability.

In response, the Prime Minister apprised him of the entire issue, saying Bangladesh signed a deal with Myanmar so that the Rohingyas could return to their home safely.