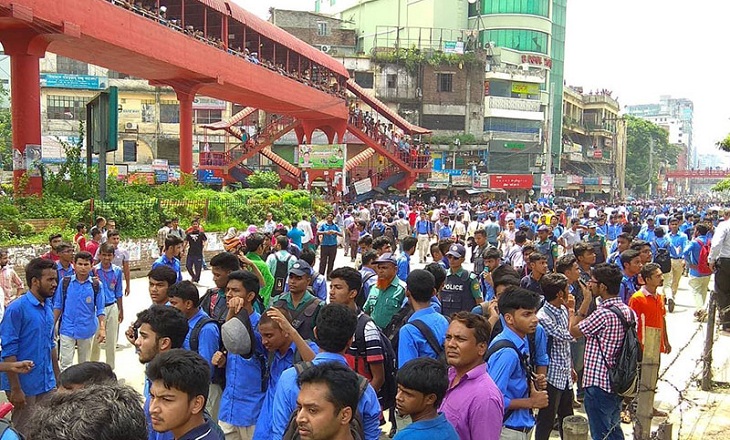 Students blockaded key points in Dhaka today demanding safe roads – in follow through of two students’ death on Airport Road in Dhaka due to reckless driving.

Today is the third straight day that the students have taken to the streets after death of two students of Shaheed Ramiz Uddin Cantonment College last Sunday.

Hundreds of students of Government Science College and Tejgaon Government Boys High School blockaded the key Farmgate intersection around 11:00am.

They echoed a nine-point demand that has been circulating among the students since yesterday, which includes resignation of Shipping Minister Shahjahan Khan – a transport leader whose smile and comment on Sunday's accident has raised a furor among people, many of whom expressed their anger on social media.

Biplob Kumar Sarker, deputy commissioner (Tejgaon Division) of Dhaka Metropolitan Police said, they were trying to calm the students and clear the roads.

“We want justice; we cannot let our friends die like that and watch and do nothing,” said Mamun Hossain, a class XII student of Government Science College.

Another class VII student of the same college, seeking anonymity, said, the shipping minister must step down as his reaction to the students’ death was quite inhumane.

Tejgaon Police Station Officer-in-Charge Mazharul Islam told The Daily Star that the students were demonstrating for demands of safe roads in Dhaka city.

Meanwhile, hundreds of students from City College, Ideal College, and others also took position on the Science Lab intersection blocking the key Mirpur Road from 11:45pm.

Dhaka city police’s Assistant Commissioner (Dhanmondi Zone) Abdullahil Kafi confirmed The Daily Star of the development and said they were trying to remove the students.

Dia Khanam Mim and Abdul Karim Rajib were killed as a Jabal-e-Noor bus ploughed through a crowd, while competing with another bus of the same company, on Airport Road last Sunday – in yet another glaring example of Dhaka’s unruly transport sector.

Aggrieved students went on rampage immediately, vandalising whatever buses they found before them. The agitation carried on for the whole day yesterday.

The intense agitation has pressured the government much; leading to the arrests of two bus drivers and two helpers today, who they said were involved with the reckless driving.