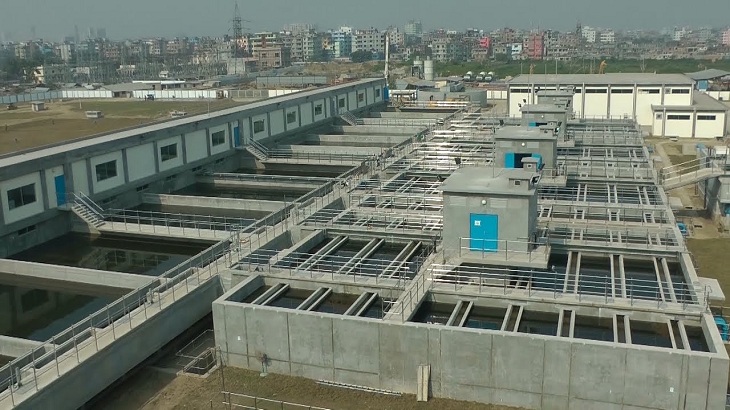 A deal for €188 million Danish loans to set up the third phase of Saidabad surface water treatment plant was finally signed on Thursday, putting an end to a long wait.

The G2G loan deal was signed between Additional Secretary of Economic Relations Division (ERD) Dr Nahid Rashid and Danish Ambassador to Dhaka Winnie Estrup Petersen at a function at ERD.

“Denmark pledged for the financing when Prime Minister Sheikh Hasina inaugurated the plant’s phase II in 2012. Finally, the loan deal has been signed after a long wait,” commented Eng Taqsem A Khan, Managing Director of Dhaka WASA, the implementing agency.

French development agency AFD, German agency Kfw and European Investment Bank (EIB) are providing fund to the project being implemented at a cost of Tk4,597 crore.

The loan being provided under Danish Mixed Credit Programme for Developing Countries will have 50 percent grant element. The loan is repayable within 10 years, six months after the project completion.

The loan interest will be paid with The Danish International Development Agency (DANIDA) support, while the government has to pay only the principal amount, ERD officials said.

The third phase of water treatment plant will has been designed to supply 45 crore litres treated water of the Meghna River per day to Dhaka city dwellers.

Once completed, the total capacity of the three water treatment plants including the existing two plants -- Sayedabad Phase-I and Phase-II  -- will be 90 crore litres per day.

The Phase-I having 22.5 crore litres capacity was constructed in 2002 under the Fourth Dhaka Water Supply Project financed by the governments of Bangladesh and France and the World Bank.

The Phase-II having the capacity of 22.5 crore litres per day was built in 2012 by Danish and French companies.

In September 2015, Executive Committee of National Economic Council (Ecnec) had approved the phase-III project at a cost of Tk4,597-crore.

It was supposed to be completed by 2020 but faced delay because of the delay in financing deals, some technical concerns and slow construction of a pipeline.

“The project will contribute a lot to combating negative impacts of climate change as it will use surface water and lower dependency on ground water,” commented Dr Nahid Rashid.

Acknowledging that Denmark has been a long-time trusted development partner of Bangladesh, she said its focus now shifted to environmental issues although it had supported agriculture, textile, IT and ship building sectors earlier.

Addressing the signing ceremony, the Danish Ambassador also heaved a sigh of relief that the deal was signed 7 years after a promise for it.

“The good thing about the project is its environmental aspect as the plant will use surface water instead of ground water that is falling sharply in Dhaka city as it is already a densely populated area,” she said.

With current population of 12.5 million, Dhaka is expected to see 21 million dwellers by 2025, according to a Wasa projection.

Currently, the water demand in the city is 235 crore litres per day. The daily supply from Wasa is around 242 crore litres, of which 78 percent comes from groundwater through 670 deep tube-wells and 22 percent from surface water, according to WASA officials.

Due to over extraction, the upper and lower aquifers of Dhaka city are about to exceed its withdrawal limit with groundwater depletion occurring at alarming rate.

To reduce the depletion of groundwater, Dhaka Wasa had targeted to meet 80 percent of Dhaka’s water demand from the surface and 20 percent from the underground by 2022.