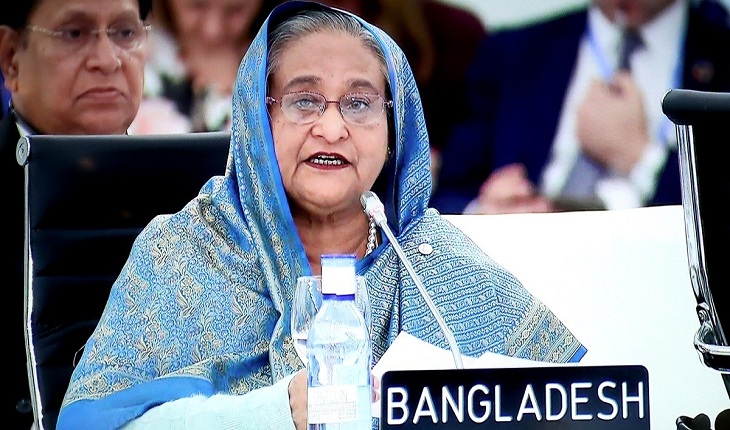 Prime Minister Sheikh Hasina on Monday renewed her call to the world community, including the European countries, for keeping up pressure on Myanmar so that they take their more than one million forcibly-displaced Rohingya people back.

Sheikh Hasina made the appeal during her separate meetings with Netherlands Prime Minister Mark Rutte and President of the European Council Charles Michel at Feria de Madrid on the sidelines of the Climate Change Summit.

"Myanmar is our neighbouring friendly country, they always say they’ll take Rohingyas back…they’ve created the problem and the solution lies with them…they never said they won’t take their nationals back, but they’ve lack of sincerity… please help us in this regard," Hasina was quoted  as saying while holding a meeting with her Dutch counterpart.

The hilly areas of Cox's Bazar are seriously being affected environmentally for giving shelter to more than one million Rohingyas, she said adding that other risks are also growing there in addition to environmental disasters.

The Prime Minister said Rohingyas are cutting down trees in the hilly areas for making their shelters. In those areas elephants used to move around, she added.

Sheikh Hasina said the government is trying to relocate the Rohingyas to Bhashan Char temporarily after preparing good facilities for them to give them a risk-free shelter.

To attend the hearing of the ICJ next week, Hasina said, Suu Kyi will be in The Hague. "You should put some pressure on Myanmar and continue it," she added.

The Prime Minister said Bangladesh is thankful to the Netherlands for raising their voice, extending political support and providing emergency aid for more than 1.2 million Rohingyas in Bangladesh.

Holding meeting with President of the European Council Charles Michel, the Prime Minister said Bangladesh is in continuous dialogue with Myanmar. "But the problem is the Rohingyas won’t go back unless they got the assurance of having Myanmar citizenship," she said.

When the European Council president questioned about the role of China in this regard, she said China, India and Japan all agree with Bangladesh that the Rohingyas should be repatriated. "Neighbouring counties including Thailand want Rohingyas to go back to their homeland and they’re cooperating with us," she said.

The Prime Minister also said the Rohingyas have cleaned all the tress surrounding their living places. "You can help us solve the Rohingya problem," she told the European Commission President.

The Foreign Minister said the Prime Minister agreed to take over the charge of the next Presidency of the Climate Vulnerable Forum (CVF) as President of Marshal Islands Hilda Heine proposed her name during the climate conference for taking the responsibility.

In response to the proposal, Sheikh Hasina said she agreed to take over the charge if other leaders of the member countries agree on the proposal, he said.

During the meeting with the Dutch Prime Minister, the Prime Minister elaborated steps of her government to construct embankments and carry out campaigns on tree plantation involving cross section of people, including party leaders and workers.

She said Bangladesh is not a carbon-emitting country and it is working on the issue of climate adaptation.

Sheikh Hasina also invited the Dutch Prime Minister to attend the celebrations of the birth centenary of Father of the Nation Bangabandhu Sheikh Mujibur Rahman next year which he accepted.

Mark Rutte also invited the Prime Minister to visit the Netherlands to join the Climate Adaptation Summit to be held on October 22 next year.

Dr Momen said Mark Rutte extended thanks to Prime Minister Sheikh Hasina as she agreed on the proposal for taking the charge of the Presidency of the CVF next year.