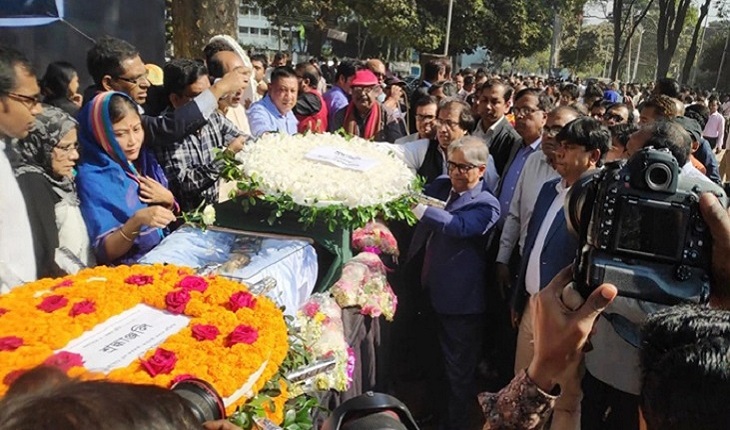 On Tuesday, people from different walks of life paid tribute to Ajoy Roy, physicist and freedom fighter, as well as the father of slain science writer Avijit Roy.

Ajoy Roy's body was kept for the people to pay their respects on Central Shaheed Minar premises around 11:30pm. In the Liberation War of 1971, he received an honor guard as a Freedom Fighter.

He died on Monday afternoon at BIRDEM hospital in Dhaka at the age of 84.
He was admitted to the hospital with fever and breathing problems on November 25, and since November 27 has been on artificial ventilation, said doctors at BIRDEM.

At the hospital's intensive care unit, BIRDEM hospital director Shahidul Hoque Mallik said he breathed his last at around 12:35pm.

Ajoy was born in Dinajpur on 1 March 1935 and retired in 2009 as a professor of physics at Dhaka University.

A renowned human rights activist and Bangladesh freethinker, he was honored in 2012 for his outstanding work in the field of education with Ekushe Padak.

Lists of rajakars will be published on December 16: Mozammel Haque