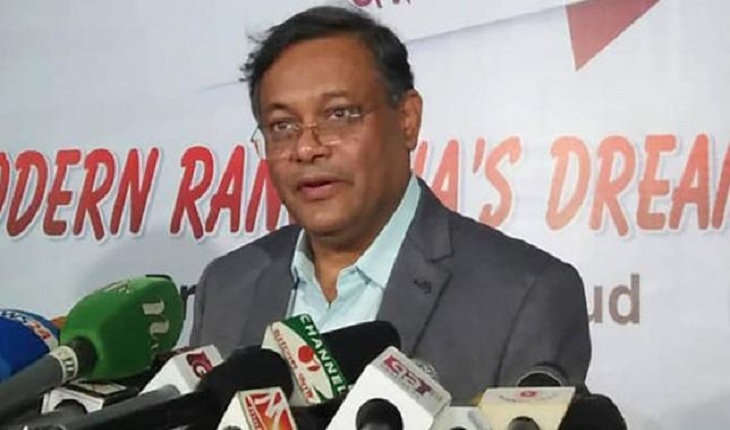 Information Minister Dr Hasan Mahmud on Saturday reiterated that the release of BNP chief Begum Khaleda Zia is possible only through the judicial process.

“Actually, they (BNP) are showing disrespect towards the court and the law by threatening to wage a movement to release Begum Zia. It is tantamount to contempt of the court,” he said, addressing the fourth triennial national conference of Bangladesh Awami Muktijoddha Projanma League (BAMPL) at Bangabandhu Avenue in the capital.

Hasan said, “The BNP chief is not a political prisoner. She is in prison being convicted in a graft case and only the court can release her. But, BNP always gives threat that they will wage a movement to release Begum Khaleda Zia . . . her release is the matter of the court and there is no other way.”

The minister said BNP couldn’t wage any movement in the last 11 years. “We saw the module of their (BNP) movement . . . Such threat of a mass movement to release Begum Zia is really a mockery,” said Hasan, also the newly elected joint general secretary of AL.

About tomorrow’s programmes of Jatiya Oikya Front in front of Jatiya Press Club against the last national polls, the minister said the alliance took part in the last general elections and some of their candidates were elected.

“The lawmakers also took oath and joined parliament. They are enjoying all facilities as lawmakers. So, I think they were cheating themselves by raising questions about the election,” he said.

Actually, he said, there is no unity among the parties of the alliance. For this, they are taking some programmes to inform their existence, he added. Terming Bangladesh as a successful country now, the minister said the country is on the way of materializing the dream of Father of the Nation Bangabandhu Sheikh Mujibur Rahman under the dynamic leadership of Prime Minister Sheikh Hasina.

“In the past 11 years, Bangladesh has maintained faster economic growth and it is one of the top countries which maintain high GDP growth in the last couple of years. The country has now turned into a middle income country,” he said.

As a result of the dynamic leadership of Prime Minister Sheikh Hasina, Bangladesh is appearing in news in global media for its faster economic growth and many other successful events, Hasan said, adding Bangladesh has exceeded India and Pakistan in many key indicators.

So, Bangladesh is being regarded as a role model of development for many developing nations, he added.

The information minister said, “Once Bangladesh faced food deficit… Despite shrinking of farm land due to rapid urbanization and construction of different infrastructures including house, Bangladesh has become a food surplus country as the present government has implemented many development programmes.”

No way to release Khaleda beyond judicial system: Hasan