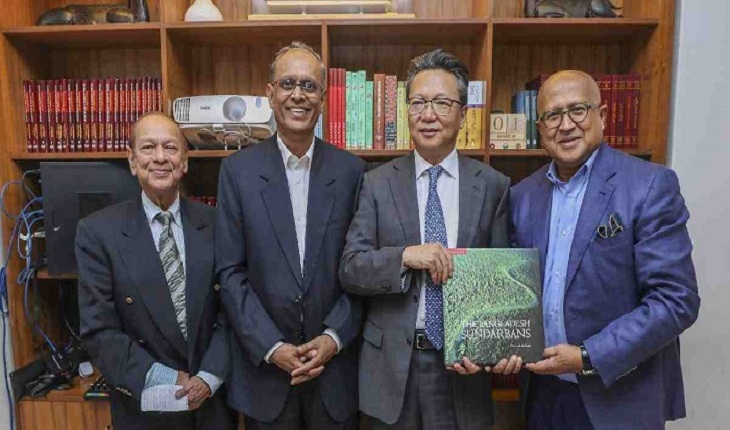 Ruling out the possibility of any “substantial impact” of the coronavirus outbreak on the ongoing mega projects in Bangladesh, Chinese Ambassador in Dhaka Li Jiming has said more Chinese companies will come to Bangladesh as the country has been a very attractive investment destination.

“I see Bangladesh-China relationship as good friends, good neighbors and trustworthy partners. Partners for economic development and partners of Belt and Road Initiative (BRI),” he told UNB in an interview.

Ambassador Li Jiming stressed that the BRI programmes will not be affected at all due to the coronavirus outbreak.

Responding to a question, Jiming said they are working on ways to ensure smooth implementation of mega projects undertaken by the Chinese companies.

“I’ve decided to visit some of the key projects, including Padma Bridge Rail Link project, to see the situation on the ground…,” he said acknowledging that there are some impacts but there will not be any substantial impact on the mega projects.

The Ambassador will visit, among others, the main camp of the first division of ‘CREC Project Management Office of Padma Bridge Rail Link Project (PBRLP) on Wednesday.

Explaining that BRI will not be affected, the Chinese Ambassador said BRI rather helps overcome the current challenges.

Ambassador Jiming said China, under the BRI mechanism, provided 500 sets of ‘most advanced testing kits’, to Bangladesh to identify coronavirus as a gesture of goodwill and strong faith that Bangladesh has in China in winning the battle against COVID-19.

“Bangladesh was the first country to receive such support,” said the Ambassador saying everybody gets benefits if China can overcome difficulties.

Expressing satisfaction over the investment climate in Bangladesh, Jiming said there is still room for further improvement, especially in land acquisition process outside economic zones and easing some policies.

"We would like to see more (investment) and more industries to invest and shift their businesses here. You’ll see much more Chinese companies," said the Ambassador adding that there are around 100 Chinese companies in Bangladesh now.

He laid emphasis on treating all the investors -- domestic and foreign equally in terms of providing some facilities.

Ambassador Jiming said power supply would not be a problem as he believes it can be resolved by next two-three years.

Ambassador Jiming said Bangladesh and Myanmar are the major players, especially Myanmar, as the problem is originated there while Bangladesh is impacted due to the influx.

He said China is playing its role to help the two countries find a solution.

Mentioning that a working mechanism is already there in place, the Chinese Ambassador said a consensus is there and many suggestions have been implemented.

"There’s a roadmap to solve this problem," he said adding that stopping further violence in Rakhine State, the repatriation of Rohingyas and development in Rakhine are three focus areas.

The Ambassador said they now see the situation in Rakhine State, especially in Northern Rakhine, stabile with no ‘current violence’.

He said the repatriation of Rohingyas is at the second stage. "I think, we’ve seen lots of very positive signs and political will to solve this problem from both sides. I’m very confident that this problem can be resolved in the near future with the return of Rohingyas in safety, dignity and in a sustainable manner."

Ambassador Jiming said so far there is no confirmed case of coronavirus in Bangladesh what he finds very encouraging. "Let’s keep it up. I would like to urge the Bangladeshi people to remain cautious but no panic. Just keep confidence in China."

Ambassador Jiming said the situation is improving inside China but they are worried about other countries where the coronavirus has spread.

He reaffirmed Chinese support to Bangladesh with medical supply and testing kits.

"I’m very happy that there’s no confirmed case in Bangladesh. I hope there’ll be no case," Ambassador Jiming said China is ready to offer help if there is any case.

The Chinese Ambassador said the Bangladeshi students who are willing to return home are not in Wuhan but in other cities, including Yichang. "The situation there is much better than Wuhan. That’s the most important reason why I recommended them to stay back there."

He said they would like to minimise the risk of spreading the virus as there is a risk of getting infected. "That’s why I’ve encouraged them to stay back in China."

Ambassador Jiming said safety and security of Bangladesh students in China is their top priority.

The Chinese Ambassador said his government protects the freedom of religious belief of all Chinese citizens, including ethnic minority groups like the Uyghur community in Xinjiang.

He said there are nearly 200 million believers of various religions in China and 20 million of them are Muslims.

With 24,400 mosques in Xinjiang, there is one for every 530 Muslims, according to the Chinese Embassy in Dhaka.

The Chinese Ambassador said this is not true that China is treating Muslims badly and laid emphasis on seeing things in own eyes.

Referring to combating terrorism, he said Bangladesh also suffered from similar kind of terror attacks in the past.

"Terrorism is a common enemy," said the Ambassador emphasising the need to deal with the issue jointly.

Coronavirus: At least 210 have died in Iran