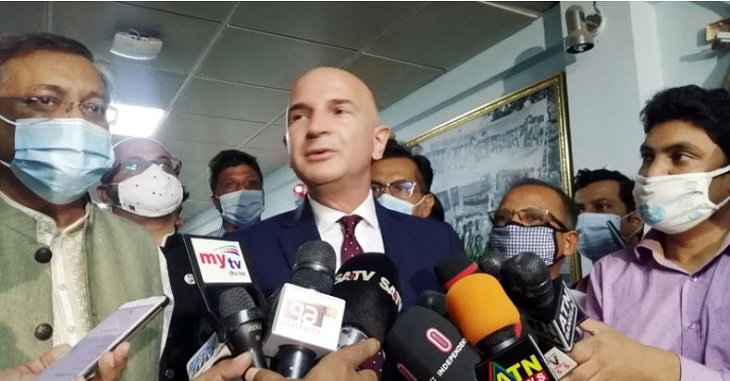 On the occasion of Mujib Year, Turkey will build sculptures of Bangabandhu Sheikh Mujibur Rahman in Ankara and Mostafa Kamal Ataturk on Kamal Ataturk Avenue in Dhaka. Such a decision came to light in the middle of ongoing sculpture controversy.

Wednesday (December 2) in the Secretariat of the Ministry of Information, Turkish Ambassador Mustafa Osman Turan made the remarks after a courtesy call on Hasan Mahmud.

The Turkish ambassador said, bilateral cooperation between the two friendly countries had been discussed. Hopefully we will attend the closing ceremony of Mujib Year. Bangabandhu is the symbol of Bangladesh and Kamal Ataturk is the symbol of Turkey. We have decided to place sculptures of these two leaders in two countries. Bangabandhu Sheikh Mujibur Rahman’s in Ankara and Kamal Ataturk’s on Kamal Ataturk Avenue in Dhaka. This sculpture will be installed soon. We also discussed whether something similar can be done in Istanbul and Chittagong.

Information Minister Hasan Mahmud said today was a courtesy call on the Turkish ambassador. Relations between Bangladesh and Turkey are historic. We have discussed today on the occasion of Mujib Year. Turkish President Recep Tayyip Erdogan has been invited on the occasion. He also agreed to come.

Overall, not just Mujib Year, next year is the golden jubilee of our independence, he said. On that occasion also we discussed in detail how we can exchange training for media and journalists.