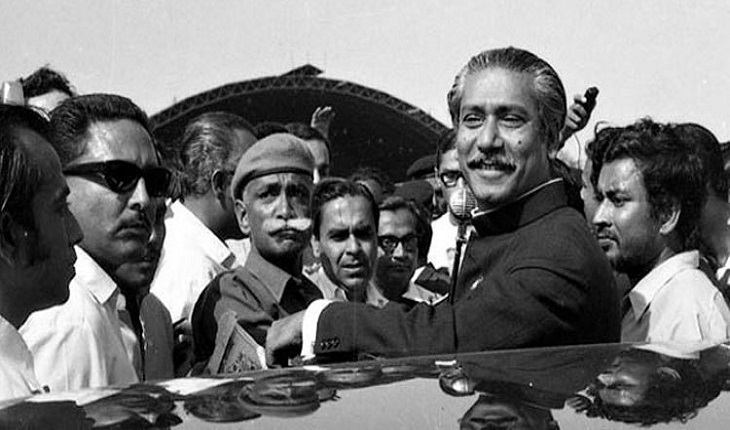 Father of the Nation Bangabandhu Sheikh Mujibur Rahman's historic Homecoming Day is being celebrated throughout the country today.

That day in 1972, after his release from prison for nine and a half months in Pakistan, Bangabandhu, the supreme commander of the country's Liberation War, returned to independent Bangladesh.

In the early hours of March 26, Bangabandhu declared Bangladesh's independence and called on people from all walks of life to join in the War of Independence.

The Pakistani military junta detained Bangabandhu from his Dhanmondi residence in Dhaka shortly after the declaration of independence and cracked down on unarmed Bengalis.

Bangabandhu was transferred to West Pakistan by Pakistan's military government and held in a jail there.

In the Pakistan jail, Bangabandhu was subjected to barbaric torture, where moments were counted for the execution of his death sentence, pronounced in a farcical courtroom.

Bangabandhu flew to London following his release, where he met then-British Prime Minister Edward Heath and addressed the international media there.

I was an inmate awaiting hanging in a condemned cage. I didn't know whether to live or not from the day I went to prison. I was able to die, emotionally. But I knew that Bangladesh would be released," Bangabandhu spoke emotionally at a news conference in London about his ordeal in Pakistani prison."

After a short stopover in Delhi, Bangabandhu flew to Dhaka on January 10, 1972.

The then Indian President VV Giri and Prime Minister Indira Gandhi, the Council of Ministers, the three-service chiefs and other dignitaries and common citizens, welcomed him.

Bangabandhu was welcomed on his return home by tens of thousands of people standing on the road from the airport to Racecourse Maidan (now Suhrawardy Udyan).

At the historic ground where the Pakistani occupying forces surrendered to the Allied Forces, Bangabandhu addressed an immense gathering of people who became a human sea.

He remembered the sacrifice of everyone during the war with appreciation and urged the people to rebuild the war-ravaged country.

On January 12, 1972, Bangabandhu took the oath of office as the country's Prime Minister.

Marking the day, extensive initiatives have been taken up by the ruling Awami League, its front organizations and other socio-cultural organizations.