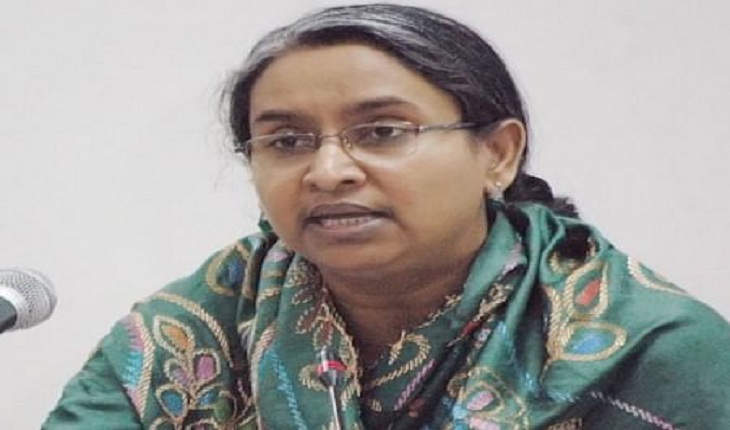 Education Minister Dr Dipu Moni today said Dhaka University will have to play the leading role to elevate the country’s quality of education to the highest level.

“In terms of ensuring quality of education and research, we are yet to meet our expected level in global ranking. Dhaka University will have to take the responsibility to elevate the quality of learning and research to the highest level”, said Dipu Moni.

She made the remarks while addressing the inaugural ceremony of the centenary conference of DU titled ‘Celebrating the 100 Years of the University of Dhaka: Reflections from the Alumni – International and National’ at Nabab Nawab Ali Chowdhury Senate Bhaban on the campus.

Dipu Moni said, “Under the leadership of Prime Minister Sheikh Hasina, we have got an opportunity to complete the unfinished task of the Father of the Nation Bangabandhu Sheikh Mujibur Rahman. For this, the highest echelon of the country’s higher education Dhaka University will lead to produce quality manpower.”

Now, the university will take the oath of producing skilled and quality manpower to be capable of adopting with the 4rth industrial revolution and attaining Sustainable Development Goals (SDGs), she added.

While presenting keynote speech eminent economist Prof Dr. Rehman Sobhan said, “Our public educational system remains the refuge of the less privileged sections of the population. Now, the challenge before our policymakers who aspire to lead us through the 21st century towards attaining developed country status is not just to expand but to elevate the quality of learning in our public institutions to the highest levels”.

It should begin with the regeneration of DU which would require massive investment of resources in recreating a world class university, he added.

At the same time, she said, the students must be emancipated from the tyranny of violence and partisan dominance which have vitiated the residential character of the campus and made learning into a challenge rather than an opportunity.