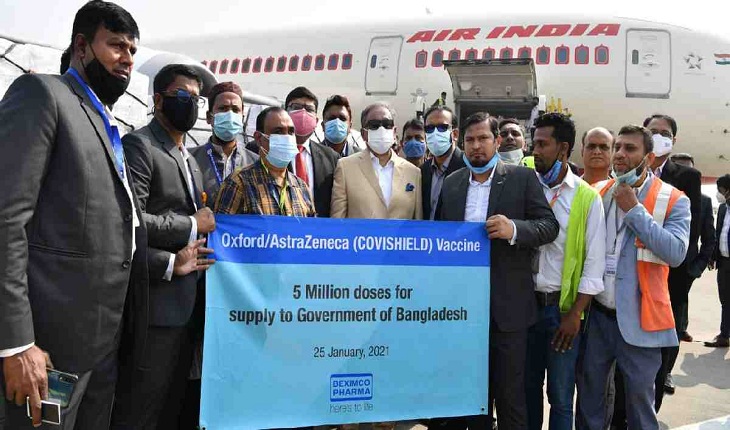 Nazmul Hassan Papon, the Managing Director of Beximco Pharma, said “As per the deal, 50 lakh doses of Oxford-AstraZeneca Covid-19 vaccine will arrive each month for six months. We have three warehouses with a capacity of preserving one crore doses.” Papon came up with the information while talking to reporters at the Airport.

Replying to a question, Papon said “Now we are receiving the vaccine from Serum Institute of India and the vaccines from two to three more companies including U.S. pharmaceutical company Johnson & Johnson will come out in the next 2/3 months. The government will decide about the production.”

Earlier, Nazmul Hassan said “The doses will be taken straight to the warehouse (Beximco Pharma warehouse in Tongi) from the airport. They’ll be sent out to all districts after necessary tests.” On Sunday, Health Minister Zahid Maleque said “India has already provided us 2 million doses. Five million doses will come as per our contract. The rest  (25 million doses) will come in phases.”

Prime Minister Sheikh Hasina will inaugurate a pilot vaccination drive on Jan 27 at Kurmitola Hospital. A nurse will receive the first jab there. The government has a list of everyone who will be vaccinated, he said, adding that permission has been given for antibody tests.

In November of last year, the Government of Bangladesh, Beximco Pharmaceuticals, and Serum Institute of India (SII) entered into a tripartite agreement to buy 30 million doses of Covishield, SII's brand name for the vaccine developed by Oxford University and British-Swedish pharma giants AstraZeneca.

The Oxford-AstraZeneca COVID-19 vaccine was proven to be safe with no major side-effects reported throughout the human trials. It generates strong antibody and T-cells response for long-term immunity against the novel coronavirus SARS-CoV-2.

A pause during the trials to address safety concerns in the second week of September received a lot of publicity, but a review by the Medicines Health Regulatory Authority (MHRA) in the UK reinforced the proof of vaccine safety, allowing the trials to resume after a week.

The Oxford vaccine, as it has rather fondly come to be known, has showcased 62% efficacy in the trials when two full doses were given to participants. However, among a limited number of participants, who erroneously received a lower first dose followed by a full second dose, the efficacy went up to 90%. That dosage regime however will not be followed.

While the efficacy of the Oxford vaccine may seem quite low compared to the extraordinary efficacy of around 95% showcased by Pfizer and Moderna’s cutting-edge mRNA vaccines in the US, the easy storage and transportation benefits of Covishield trumps the mRNA vaccines that must be stored at ultracool temperatures of -20 t0 -70°C. The Oxford-AstraZeneca vaccine can be stored at regular fridge temperatures (2-8 degrees Celsius).

It should also be noted that health regulators had officially announced they would be ready to accept a vaccine with efficacy as low as just 50%. Some seasonal flu vaccines have efficacy as low as 30-40%. Globally, the Oxford-AstraZeneca/Covishield vaccine is named AZD1222 and is co-invented by the University of Oxford and its spin-out company, Vaccitech.

The vaccine uses a replication-deficient chimpanzee viral vector (i.e. it cannot replicate inside the body) based on a weakened version of a common cold virus (adenovirus) and contains the genetic material of the SARS-CoV-2 virus spike protein.

After vaccination, the surface spike protein is produced in the human body without any impact of the actual COVID-19 disease, enabling the immune system to recognise the Spike protein and attack the SARS-CoV-2 virus if it infects the body in future.

In June 2020, SII signed an agreement with AstraZeneca, the Gates Foundation and GAVI to produce 100 crore doses of AZD1222 under the brand name Covishield, mainly for supply to developing countries. Beximco Pharma and SII signed a "cooperation and distribution agreement" in late August over development of a COVID-19 vaccine, for which Beximco would be the "exclusive supplier" in Bangladesh.

The agreement, which is public due to Beximco Pharma's listing on the London Stock Exchange, stated: "Under the terms of the planned arrangement, Beximco will make a financial contribution to advance the development of the vaccine which will be adjusted based on the vaccine price. SII will  prioritise Bangladesh to be one of the first countries to receive an agreed quantity of doses once the vaccine receives all necessary regulatory approvals. Beximco will be the exclusive supplier of the vaccine in Bangladesh and will facilitate the needs of the Government of Bangladesh by offering the opportunity for it to reserve the desired quantities for priority supply at prices to be agreed between the Government and SII."

Bangladesh recorded a daily infection rate (also known as positivity rate, it tells us out of the number of tests conducted, how many come back positive for COVID-19) of 3.34% with 473 new cases reported until early Sunday.