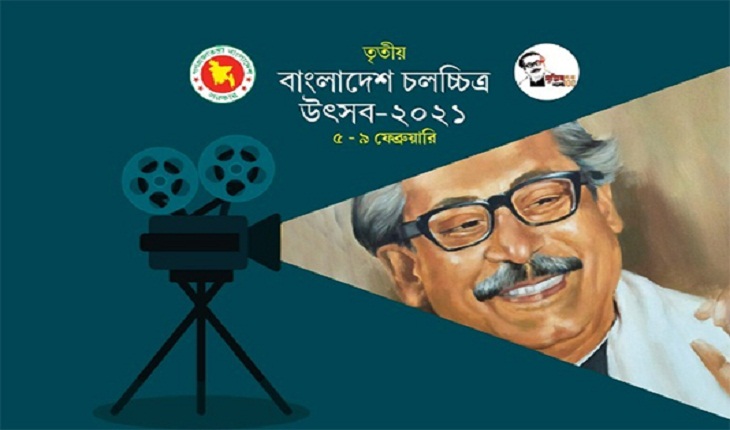 Minister for Science and Technology of West Bengal Government Bratya Basu will attend the festival as the guest of honour while Bangladesh High Commissioner to India Muhammad Imran and noted Film Director of India Gautam Ghosh will be present as the special guests.

The festival will begin with the screening of the film “Hasina: A Daughter’s Tale”, produced by eminent writer Abdul Gaffar Chowdhury based on the life of Sheikh Hasina, the incumbent Prime Minister of Bangladesh and daughter of Father of the Nation Bangaabndhu Sheikh Mujibur Rahman.

Besides, an art exhibition titled ‘Bangabandhu and Bangladesh’ will be held during the festival marking the birth centenary of Bangladesh’s founding father Bangabandhu Sheikh Mujibur Rahman. A total of 100 photographs will be displayed at the exhibition to be held at 4:00 pm at the Academy of Fine Arts in Kolkata.

Meanwhile, the Deputy High Commission of Bangladesh in Kolkata will accord a reception to a number of Indian citizens, who received the Bangladesh Freedom Fighter Friendship Award at a function at Brigade Parade Ground in Kolkata, at 3.30 pm on February 6. Information Minister Dr. Hasan Mahmud will attend the function as the chief guest, the sources said.

The function is being organized marking the grand celebration of birth centenary of Bangabandhu Sheikh Mujibur Rahman, 50th anniversary of the independence of Bangladesh and the historic rally of Bangabandhu at the Brigade Parade Ground, Kolkata, on that day in 1972.

After Bangladesh’s independence, Bangabandhu paid his first visit to Kolkata on February 6, 1972 when the then Indian Prime Minister Indira Gandhi received him at Dumdum Airport.

Then both the leaders addressed a mass rally at the Brigade Parade Ground. During the visit, it was decided that India would withdraw its army from Bangladesh by March 1972.