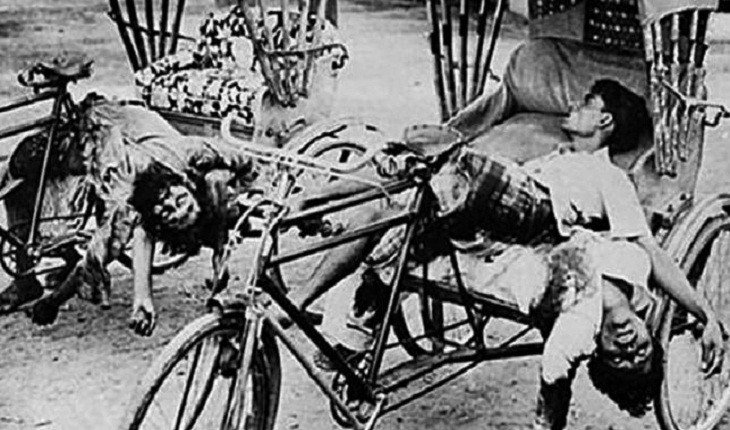 The world history recorded March 25, 1971, black night as a rare case when the military of a country launched a sudden brutal assault on sleeping civilian population of the same country the way the Pakistani army did under the infamous Operation Searchlight, as they called it.

Two top military commanders who were tasked to oversee the nationwide Bengali cleansing campaign on that night and a relatively junior officer subsequently came up with their own write-ups.

The third of them, Major Siddiq Salik, described the scene at their headquarters in Dhaka Cantonment in a vivid manner as the Operation Searchlight was underway.

“The gates of hell had been cast open,” Salkik wrote in his widely-talked-about book ‘Witness to Surrender’ while two of the senior commanders in their own publications visibly tried to narrate the developments with an apparent effort to conceal their brutality.

Salik, who worked as the Pakistan military’s spokesman in the then East Pakistan, also recalled that the March 25, 1971 night in Dhaka was like a usual soothing spring night.

“The city, wrapped in starlight, was in deep slumber. The night was as pleasant as a spring night in Dacca could be. The setting was perfect for anything but a bloody holocaust,” he wrote.

According to him, the “Operation Searchlight” was designed to set up two headquarters at Dhaka Cantonment with Major General Rao Farman Ali and Major General Khadim Hussain Raja being their top commanders.

Farman Ali was assigned to execute the operation in Dhaka city and its suburbs and Raja was tasked to oversee its accomplishment in rest of East Pakistan.

“Lieutenant-General Tikka Khan (governor and top commander) and his staff were to spend the night at the Martial Law Headquarters in the Second Capital to watch the progress of activities in and outside Dacca,” Salik wrote.

He said junior officers like him started rallying at Martial Law Administrator’s Headquarters at about 10 pm and “they laid out sofas and easy chairs on the lawn and made arrangements for tea and coffee to last the night”.

“A jeep fitted with a wireless set was parked next to this ‘outdoor operations room’ while wireless set fitted in the jeep groaned for the first time at about 11.30 pm,” he wrote.

Salik said the local commander in Dhaka sought permission to advance the H-hour because ‘the other side’, meaning Bengali protestors, were hectically preparing for resistance while everybody at the scene looked at their watches.

“The President (Yahia) was still half way between Colombo (Sri Lanka) and Karachi. General Tikka gave the decision. ‘Tell Bobby (Brigadier Arbab) to hold on as long as he can,” he wrote.

Salik wrote the troops were to be in their target areas before 1 am but some of them, anticipating delay on the way, had started moving from the cantonment at about 11.30 pm.

Those who were already in the city to guard the radio and television stations, telephone exchange, power house and State Bank etc., had also taken their posts “much before the H-hour”, he wrote.

Salik wrote the first column from the cantonment met resistance at Farm Gate, about one kilometer from the cantonment as it was halted by a huge tree trunk freshly felled across the road while the side gaps were covered with the hulks of old cars and a disabled steam-roller.

“On the city side of the barricade stood several hundred Awami Leaguers shouting Joy Bangla slogans. I heard their spirited shouts while standing on the verandah of General Tikka’s headquarters,” he wrote.

“Fifteen minutes later the noise (Joy Bangla) began to subside and the slogans started dying down. Apparently, the (military) weapons had triumphed. The army column moved on to the city,” he wrote.

Salik recalled when the first shot had been fired, ‘the voice of Sheikh Mujibur Rahman came faintly through on a wavelength close to that of the official Pakistan Radio’.

“In what must have been, and sounded like, a pre-recorded message, Sheikh (Mujib) proclaimed East Pakistan to be the People’s Republic of Bangla Desh,” Salik wrote referring to a subsequent write-up by British journalist David Loshak.

General Raja who later wrote memoirs titled “A stranger in my own country” recalled on that evening he and Farman Ali along with their wives went to the Garrison Cinema to watch a movie.

Raja found the attendance to be normal but was surprised to see all the Bengalis had left the cinema premises when the lights were switched on at the interval.

“The departure of the President and its implication– that negotiations to solve the current crisis had failed – was, after all, not a well-kept secret,” he wrote.

The troops, he said, however, “got into readiness in their barracks” and “apart from the normal infantry, we had activated a troop of PT76 tanks (while) we also had some 106mm recoilless rifles standing by for hard targets”.

“My headquarters (to oversee operations outside Dhaka) had been fully activated and was functional . . . (but) for me, the wait was torturous,” Raja wrote.

“Lieutenant Colonel ZA Khan of the 3 Commando Battalion, with some forty men, was a standing by to accomplish his mission of taking Sheikh Mujib alive,” he wrote.

Rao Farman Ali in his book “How Pakistan Got Divided” wrote the planned “Operation Searchlight” was not an ordinary military operation which is done to extend cooperation to a civil government enforcing curfew to control the situation after any severe riot and “here the situation was completely different”.

“Here the necessity was to restore government authority as a revolt took place which was needed to be curbed using force,” he wrote.

Farman Ali said two generals — Iftikhar Janjua and AO Mitha Khan — were called from West Pakistan to grab the responsibility from him and General Raja if they showed any weakness in executing the operation.

Farman Ali said two other generals – Omar and Khuda Dad – were present as well in Dhaka at that time while all were ignited like fire and ridiculing Farman and Khadim for what he claimed “their softer attitude”.

The Pakistani military wireless communications intercepted during the operation suggested their prime objective was to kill as many as Bengalis they could on that night.

“I believe only in one thing,” heard a commander of the infamous Operation Searchlight.