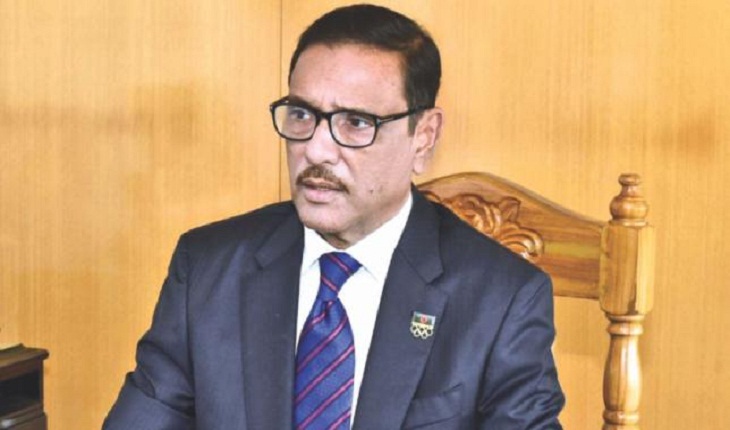 “BNP is daydreaming of staging a 1/11-like incident through creating unrest in the country. On the contrary, BNP leaders at all levels are communicating behind the scene to join AL,” he told a regular press conference on contemporary issues at his official residence here.

Quader said as BNP is a party of conspirators, they smell conspiracy everywhere.

As BNP had searched for various undemocratic paths to sustain their stay in state power, in the same way, they are still walking on the dark alleyways becoming desperate to retain power, he said.

About BNP leaders’ remarks that there is no crisis in BNP over leadership of Begum Khaleda Zia and Tarique Rahman, the AL general secretary said making the remarks showing great pomp hints that there is something wrong.

Asked about BNP’s announcement of waging movement for realizing people’s rights, the minister said when protecting people’s life is the highest priority in the wake of the coronavirus crisis, BNP is threatening to wage a movement, he said.

He said as BNP cannot read the people’s mindset and real situation, they are getting isolated from people’s expectations day by day.

When BNP was in power, snatching people’s rights was the party’s politics, but bringing a smile on the face of people by realizing their rights is the politics of AL and Prime Minister Sheikh Hasina, he added.

Quader said the people consider BNP’s announcement of waging movement instead of staying beside distressed and working-class people during the crisis as the imprudent and irresponsible political thinking of party which is isolated from people.

Shouting for waging movement is nothing but evil acts of BNP to hide their failures to stay beside the people during the coronavirus crisis, he said.

Mentioning that BNP’s work is to make the government and the country’s achievements controversial, the AL general secretary said BNP is very efficient in shifting own liability of failures to others.

Since the outset of the coronavirus crisis, BNP has been making evil attempts to confuse the people by spreading various rumors and propaganda, he said, adding that the people don’t get confused at BNP’s propaganda as they can understand what is rumor.

He said vaccines for Covid-19 (coronavirus) again started coming to the country as per the promises of Prime Minister Sheikh Hasina.

Quader said 25 lakh fresh doses of vaccines have already reached the country and more vaccines will reach within a few days.

He urged the people to receive vaccines and follow the health guidelines properly and stay at home during the ‘lockdown’ to help contain the spread of the deadly virus.

The minister extended thanks to those who cooperated with the government as well as the law enforcement agencies by maintaining health guidelines during the lockdown in the last couple of days.