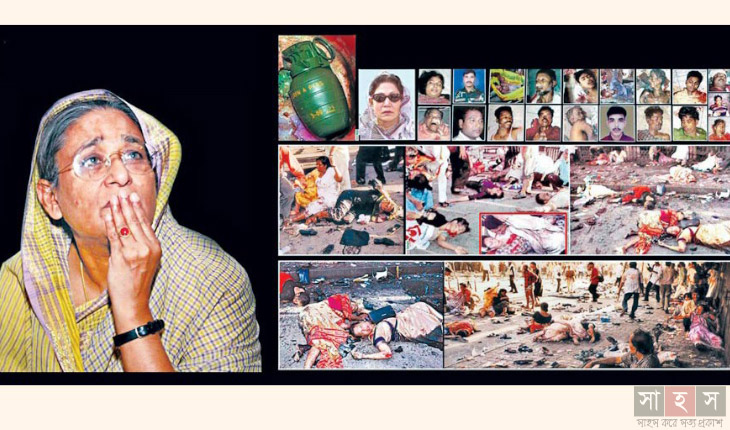 The 17th anniversary of the gruesome grenade attack on an Awami League (AL) anti-terrorism rally in the capital on August 21, 2004, is being observed today with heavy hearts.

The grisly grenade attack was carried out on the anti-terrorism rally of Awami League (AL) on Bangabandhu Avenue here on August 21, 2004, aiming to bankrupt the party leadership during the BNP-Jamaat alliance government.

With the grace of the Almighty, the then opposition leader and incumbent Prime Minister Sheikh Hasina and other front-ranking AL leaders narrowly escaped the carnage.

But, 24 people including the then Women Affairs Secretary of Awami League and wife of late President Zillur Rahman were killed and over 500 others injured in the attack and many of them became crippled for life.

Marking the anniversary, the ruling AL, its front and associate bodies and its left-leaning allies, and other political parties, social-cultural and professional organisations have chalked out elaborate programmes across the country, maintaining health guidelines in wake of the COVID-19 situation.

A discussion will be held at 10:30 am to recall the victims of the dreadful grenade attack.

Awami League President and Prime Minister Sheikh Hasina will preside over the meeting from Ganabhaban here through video conferencing.

As part of the programmes, AL, its associate bodies and other political bodies will place wreaths at the altar in front of the party's central office at Bangabandhu Avenue here.

Due to the pandemic, a limited number of programmes will be held to commemorate the day.

Central leaders of Awami League, leaders of the Dhaka Metropolitan Awami League and allied organizations will be present at those programmes in compliance with the health rules.

Awami League General Secretary and Road Transport and Bridges Minister Obaidul Quader has called upon the leaders, activists, supporters and well-wishers of the Awami League and its allies bodies to observe the day with due dignity.

The nation's long wait seeking justice of the brutal grenade attack that killed 24 people and wounded nearly 500 finally ended as a special court pronounced the verdict of a case filed over the attack on October 10, 2018.

With the verdict pronounced by Dhaka's 1st Speedy Trial Tribunal Judge Shahed Nur Uddin, the nation was freed from the stigma of committing the most shocking crime in political history.

Later, the lower court on November 27, 2018, sent a 37,385-page case document including the judgment to the High Court for further proceedings.

The High Court on January 13, 2019, accepted appeals filed by the convicts in two cases registered over the August 21 grenade attack for hearing.

Two separate cases, one for murder and another under Explosives Substances Act were filed on August 22, 2004, and the police on June 9, 2008, submitted the charge sheet. The court on September 29, 2008, framed charges in the case.

Investigation Officer and also Additional Deputy Inspector General of Criminal Investigation Department (CID) of police on July 2, 2011, submitted a supplementary charge sheet before the court and the court on March 18, 2012, framed charges afresh after taking the new charge sheet into cognizance.

Fifty-two people were held accused in the case while prosecution suggested an influential quarter of the then BNP regime including the party's senior vice-chairman Tarique Rahman masterminded its shocking plot engaging militant outfit HuJI and subsequently made desperate efforts to protect the assailants.

Three of the accused top HuJI leader Mufti Abdul Hannan, Sharif Shahedul Bipul and then Jamaat-e-Islami secretary general Ali Ahsan Mohammad Mujaheed, however, have been executed after trial in other cases.

A total of 31 accused including two former ministers faced the trial in person while 18 including Tarique Rahman were tried in absentia as they are believed to be staying abroad.

Tarique, now in London, and 17 others including several intelligence officials were earlier declared "absconding" as they were on the run to evade justice.

Eight suspects including three former police chiefs were on bail as the trial was underway while the court on September 18, 2018, scrapped their bail and ordered their confinement in jail with due facilities they deserved under law.

Other than Rahman, the political figures who were handed down life imprisonments were: ex-premier Khaleda Zia's the then political adviser Haris Chowdhury and former BNP lawmaker Qazi Shah Mofazzal Hossain Kaikobad.

They all were also fined Taka 50,000 each in the case lodged under the Explosive Substances Act.

During the BNP-Jamaat regime, the investigators were trying to divert the probe in the wrong direction to save the real culprits. Media reports brought to public attention the cooked-up story of Jorge Mia by the then CID officials to derail the investigation.

The visible attempt to frustrate the case by the then BNP-led regime prompted the subsequent interim government to order a fresh investigation into the case.