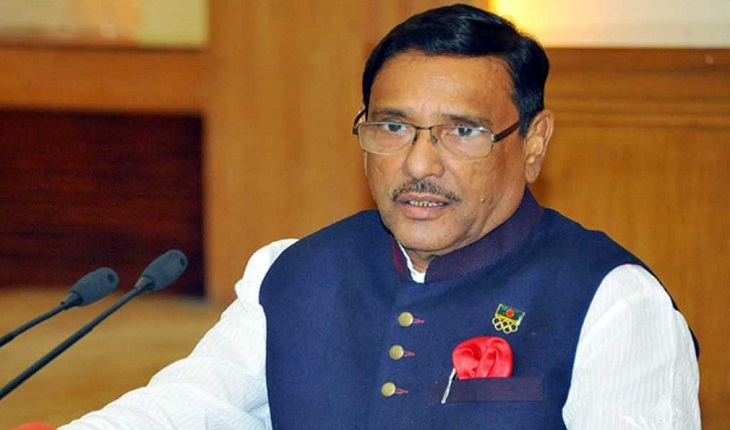 Awami League General Secretary Obaidul Quader today said that the BNP depending on parasitic movement has continued its various ill-efforts to disrupt the existing stable condition of the country.

He came up with the remark while addressing a press conference on contemporary issues at his official residence in the capital.

Quader, also the road transport and bridges minister, said the government had earlier feared that a plot was being hatched to make the university campuses unstable.

The parasitic movement-dependent BNP continues its various attempts to destroy the existing stable situation of the country, he said, adding that the BNP is carrying out supernatural activities with the help of communal forces.

He said when the students and teachers are preparing to take educational activities forward coping with the loss caused by the ongoing coronavirus pandemic, the BNP is playing dirty politics to destabilise the campuses.

Mentioning that the BNP is the real monstrous force in the country's politics, Quader said Prime Minister Sheikh Hasina and the Awami League have brought economic emancipation to the country's people while the BNP brought the chain of dependency.

He said recently police went to Chandrima Udyan here to cooperate with the BNP in holding its programme, but the BNP men tried to make water troubled through clashes, violating the law and order.

But, he said, the law enforcing agencies have to take action if elements of terrorism and anarchy are found in the programmes.

Quader said there is no objective condition for waging a movement now in the country and the people have been seeing what the objective preparation the BNP had in the last 12 years. After the winter and summer, the BNP is now dreaming of ousting the present government in autumn, he added.

Fakhrul claimed that General Hussain Muhammad Ershad carried the coffin of Zia but Ershad never said that the Zia's body was inside the coffin, the road transport minister said.

Asking a question to Fakhrul, Quader said: "Who took Zia's body to Rangunia hill from Chattogram Circuit House after his killing? Mr Fakhrul is trying to conceal it".