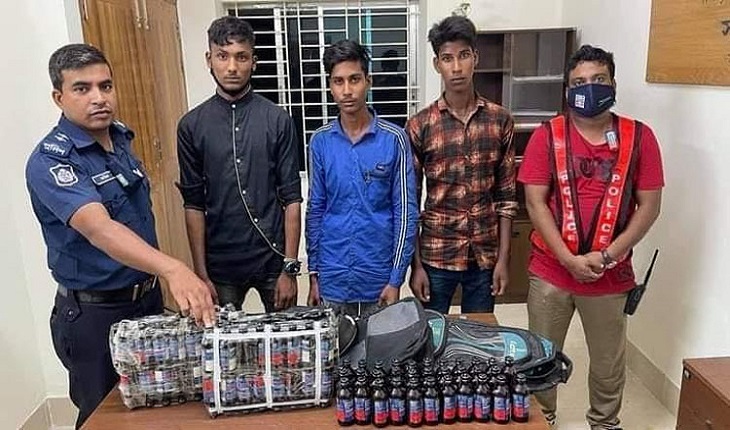 Gobindaganj Thana Police in a drive arrested three drug traders with 94 bottles of Indian phensidyl from a passengers bus at Gobindaganj upazila town on Monday night.

The arrested are identified as Masud Rana, 26, son of Hamidul Islam of Dalla Nunamati village and Noor Islam, 21, son of Hafizur Rahman of Dallah Baniakhari village under Chirir Bandar upazila and Sakib Miah, 21, son of Bablu Miah of Baraipur village under Kotoali Thana of Dinajpur district.

Acting on a tip-off, a team of the Gobindaganj Thana Police halted a Dkaka-bound Passengers bus coming from Dinajpur in Badhan Patrol Pump area of the upazila town around 10.30 pm and recovered 94 bottles of contraband phensidyl wrapped in a school bag while searching the passenger's bags of the bus.

Besides, police also held three persons in this connection.

Officer-in-Charge (OC) of Gobindaganj Thana AKM Mehedi Hasan confirmed the incident and said a case was filed with the thana against them under Narcotics Control Act.