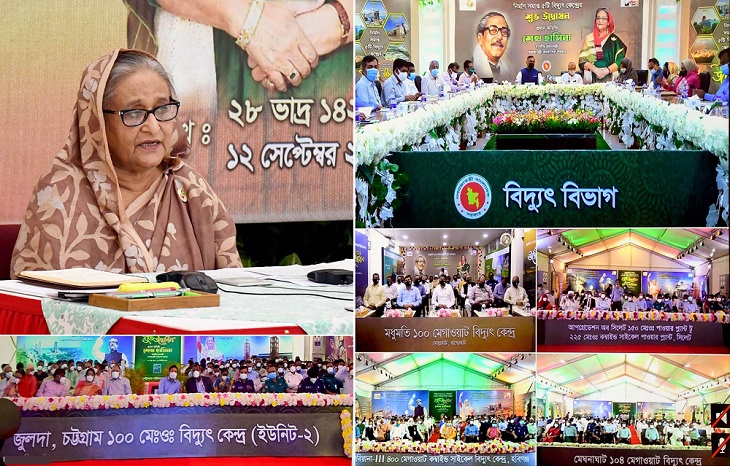 Subsequently, she also called upon the countrymen to uphold the existing pace of development with the long-term vision formulated by the government, asking them, "Let not allow anyone to come to power again who will bind Bangladesh up in the chains of slavery".

The Premier made this call while inaugurating five power plants as the chief guest.

Joining the ceremony through videoconferencing from her official residence Ganabhaban, Sheikh Hasina said, "The government has been providing a huge subsidy to power generation and that is why you (people) are getting electricity at an affordable price . . . If you don't remain economical in using electricity, we can't continue this subsidy anymore."

She said both the solvency and purchasing power of people in rural areas have increased as they can now afford TV, refrigerator and in many cases AC also. She added, "Their capacity has increased gradually and it has grown even more, it's our desire. . .there will be no disparity and people will get every facility."

But, in this connection, she noted, people have to develop the habit of austerity as there is no disgrace if he/she exercises the practice of putting off the switch with their own hands after using electricity.

The Prime Minister also highlighted her government's long-term plans such as Perspective Plan, Vision-2041, and Delta Plan-2100 to turn Bangladesh into a developed country and hoped that generation to generation will pull the country forward with this pace of development following the plans.

She continued Bangladesh is an independent country and it will continue its progress keeping the head high with esteem, so "(You people) let not allow anyone again to enchain you in slavery".

A video documentary on the five power plants was screened at the ceremony.

The Premier also unveiled the cover of a publication titled "100" on the occasion of the birth centenary of Father of the Nation Bangabandhu Sheikh Mujibur Rahman.