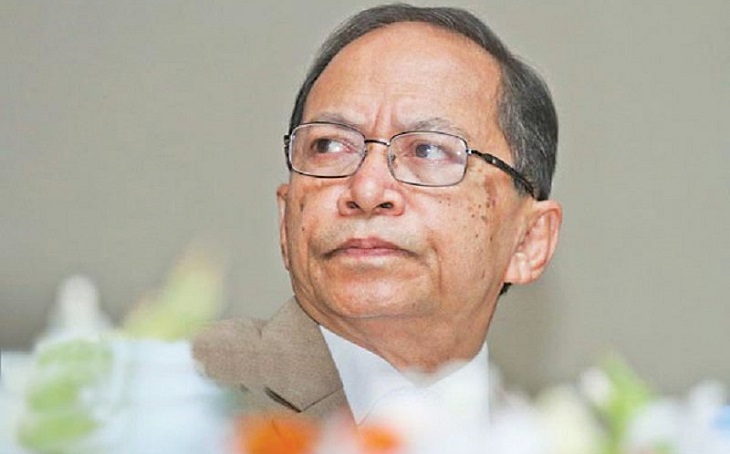 A court here today convicted and sentenced former Chief Justice Surendra Kumar (SK) Sinha to 11-year imprisonment in a case filed for embezzling Taka four crore from the then Farmers Bank and laundering the money abroad.

The former Chief Justice was sentenced to seven-year imprisonment and fined Taka 45 lakh on the charge of money laundering and was handed down four years jail and fined Taka 50 thousand for embezzling the money. But the judgement said the sentences under both the charges will run concurrently.

The court in its observation said the loan was sanctioned for the former chief justice by violating the credit policy of the bank through influence, adding, "It has also been proven that the money was laundered abroad."

Two other accused Md Shahjahan and Niranjan Chandra Saha were acquitted by the court.

Earlier the court started reading out the 182-page judgement at 11.04 am in presence of the seven accused out of total 11 and concluded at around 1.10pm.

The seven accused, who were on the dock during the pronouncement of the judgement, are -Md Mahbubul Haque Chisty alias Babul Chisty, AKM Shameem, M Lutful Haque, Gazi Salauddin, first vice-president of then Farmer's Bank Swapan Kumar Roy, and bank clients Md Shahjahan and Niranjon Chandra Saha. Of these, five were convicted and were later sent to jail with conviction warrants.

The other four accused including the former Chief Justice are yet to be arrested.

Seven accused out of the total 11 in their statements in self defence on August 29, had pleaded not guilty and demanded justice from the court. These seven accused are- Babul Chisty, AKM Shameem, M Lutful Haque, Gazi Salauddin, Swapan Kumar Roy, and bank clients Md Shahjahan and Niranjon Chandra Saha.

The Anti-Corruption Commission (ACC) filed the case on July 10, 2019, for embezzling Taka four crore from the then Farmers Bank and laundering the money abroad.

According to the allegation, Md Shahjahan and Niranjan took the money on loan from then Farmers Bank, which was later transferred to Justice Sinha's Sonali Bank account, showing it was earned from selling of his (Sinha's) house.

SK Sinha to be brought back home to put on trial