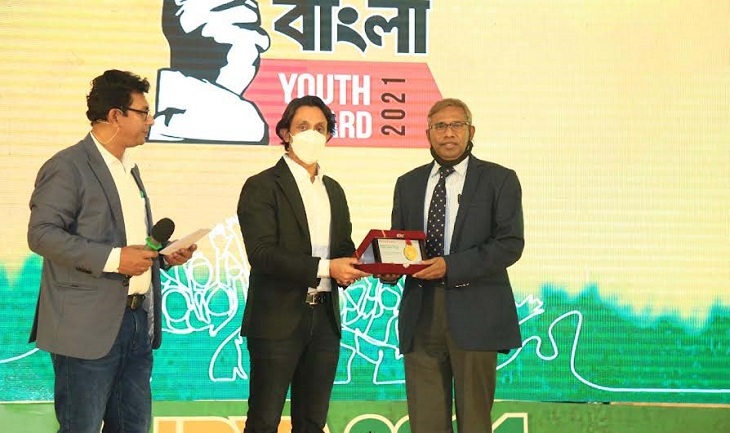 The 'Mongol Shovajatra' on the first day of the Bangla New Year , that is organized at the Fine Arts Institute of Dhaka University, is a cultural marker for Bengali nationalism, on which Bangladesh stands.

In 1989, the teachers and students of Fine Arts Institute, now the Faculty of Fine Arts at the Dhaka University, started the 'Mongol Shovajatra'.

And to carry this idea forward to the global stage, the dean of the fine arts faculty, Nisar Hossain, played a significant role in getting it incorporated by the UNESCO's Representative List of Intangible Cultural Heritage of Humanity.

The story of Professor Nisar Hossain was passed on to the platform of Young Bangla during the Joy Bangla Youth Award giving ceremony on Monday.

Apart from its regular arrangement of recognizing the country's young changemakers, Young Bangla added new Award this - Pathfinder of 50 Award - themed on the Golden Jubilee of the country's independence.

It's a special recognition to individuals who have made significant contributions to the post-independence nation-building process through their leadership, service, initiatives, and research.

Professor Nisar was one of the three recipients of this award conferred this year by Young Bangla, the youth wing of Centre for Research & Information (CRI).

"I desire that the young generation will march forward holding that spirit in their heart," he said.

Another recipient of the Pathfinder of 50 was Anjuman Mufidul Islam, a Bangladeshi welfare organization specially designed to enrich the livelihood of orphans and the distressed.

Having started its journey in September 1947 as a branch of its Kolkata office in Dhaka, it expanded its footprint to 42 other districts.

When the Coronavirus pandemic instilled a morbid fear of infection among people and even relatives left the dead bodies of Corona patients untouched, this organization offered burial services for them.

It also reached out to people with relief during the epidemic. The joint director of Anjuman Mufidul Islam, Harun ur Rashid Khan, received the award on behalf of the organization.

The award was also conferred on Rubaiyat Mansur and Elisabeth Fahrni who played a crucial role in making three sanctuaries for freshwater dolphins in the Sundarbans.

Their untiring effort to preserve wildlife earned them the Pathfinders of 50 Award, which freedom fighter Hasan Mahmud Khokon came to receive on their behalf.