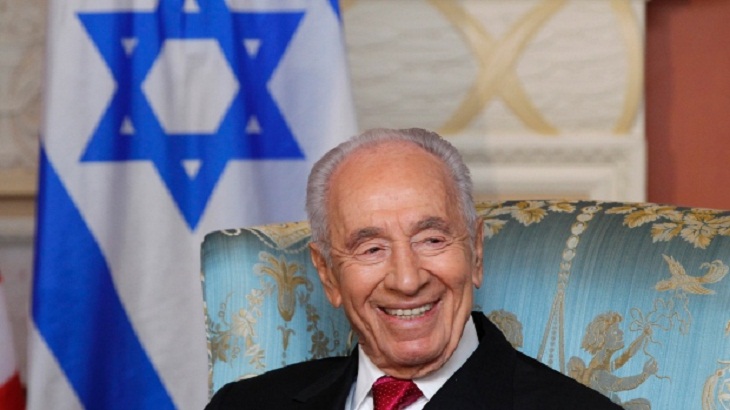 Shimon Peres, one of Israel’s defining political figures and a Nobel peace prize laureate, has died at the age of 93, two weeks after suffering a stroke.

Peres had twice served as prime minister of Israel and later as the country’s ninth president. He had been seriously ill on a respirator in an Israeli hospital near Tel Aviv and died after his condition deteriorated sharply.

Among those who have said they will attend his funeral and burial on Jerusalem’s Mount Herzl on Friday are president Barack Obama, democratic presidential candidate Hillary Clinton and her husband former president Bill Clinton, as well as Prince Charles and the French president Francois Hollande.

In over six decades of political life his defining achievement was as one of the key architects of the Oslo peace accords, for which he was jointly awarded the Nobel peace prize with the then Israeli prime minister, Yitzhak Rabin, and Yasser Arafat, the chairman of the Palestine Liberation Organisation in 1994.

Those peace agreements - signed in Washington in 1993 and Taba, Egypt in 1995, signed between Israel and the Palestinian - foresaw the creation of a Palestinian state - and were named after the Norwegian capital where the two sides launched eight months of secret negotiations in which Peres played a key role.

With Peres’s death the last of that trio has now gone.

Yitzhak Rabin was cut down by a right wing assassin’s bullet in 1995, with Arafat himself dying nine years later in 2004. And today the prospect of the peace and two state solution offered by Oslo is further away with the collapse of that peace process in 2014.

Peres’s death was formally confirmed on Wednesday morning by his son Chemi in a news conference at the hospital where his father had been treated. He had been rushed to hospital on 13 September after suffering a stroke.
Today with deep sorrow we bid farewell to our beloved father, the ninth president of Israel,” said Peres’s son. “Our father’s legacy has always been to look to tomorrow. We were privileged to be part of his private family, but today we sense that the entire nation of Israel and the global community share this great loss. We share this pain together.”

Within hours of his death, tributes to Peres began from world leaders. In a statement, President Barack Obama described him as “the essence of Israel itself”.

He added: “As Americans, we are in his debt because, having worked with every US president since John F Kennedy, no one did more over so many years as Shimon Peres to build the alliance between our two countries – an unbreakable alliance that today is closer and stronger than it has ever been.”

UN sectreray general Ban ki-Moon added: “He worked tirelessly for a two-state solution that would enable Israel to live securely and harmoniously with the Palestinians and the wider region,” Ban said of the former Israeli leader who died at 93.

“Even in the most difficult hours, he remained an optimist about the prospects for reconciliation and peace,” Ban added.

Former president Bill Clinton and Democratic presidential nominee Hillary Clinton said they had “lost a true and treasured friend” following news of the death. The Clintons said Israel had lost a leader “who championed its security, prosperity and limitless possibilities from its birth to his last day on Earth”.

They called him “a genius with a big heart who used his gifts to imagine a future of reconciliation, not conflict”.
Friends and confidantes of Peres on Wednesday offered a mixed view of his legacy, not least regarding the Israel-Palestine peace process with which he was so closely associated.

Describing a tireless individual friend, neighbour and biographer Michael Bar Zohar suggested that despite being one of its strongest proponents Peres also recognised the failure of Oslo.

“The Oslo agreement was not a very big success, not its conception, not its writing, not its partner,” said Bar Zohar.
“It was one of things he regretted most, but he still stuck to conviction that Oslo was great thing and that the ‘new Middle East’ was a new reality despite what was happening around us.

“He still felt two state solution could be implemented although he was critical of the Israeli government about the stalemate in those negotiations and partly the Palestinians as well.”

The leader of Israel’s opposition Isaac Herzog, who had known Peres since childhood first through his father Chaim Herzog, himself a president of Israel, described a man who lived his life largely in public.

“I was close confidante of Shimon Peres,” he said on Wednesday. “My father was a colleague of his and I was also an adviser and an assistant to him as well as a member of government with him. For me he was a teacher and mentor.
On Oslo he added: “I think Peres vision of a two state solution is alive kicking. It has problems. Stumbling blocks. But it is still possible. ... I think the tragedy is both people {Palestinians and Israelis] in majorities want move to a two state solution. It is not moving because of politics. But his dream will be implemented.”

Despite his role in the Oslo accords Palestinians and wider Arab world saw the legacy of Peres differently, with many portraying him as a key figure in early settlement construction and pointing to his role in the 1996 Israeli assault on Lebanon which saw the deaths of some 106 civilians when a UN base where they were sheltering was shelled.

For many Israelis - even those on the right who opposed his support of the peace process as ‘naive’ - Peres will be remembered for a career that intimately tracked the country’s short history.

The last surviving figure associated with the founding of modern Israel, Peres’s life story tracked many of the most important political moments seeing him move from being a hawk to a peacemaker – a legacy that

he became one of the country’s most popular public figures, serving a seven-year term as president from 2007-14.
Even after his presidential term ended, Peres remained a high-profile figure who continued to make interventions on the country’s political direction and sought to maintain an active schedule, particularly through events related to his Peres Centre for Peace.

As recently as last year, Peres strongly criticised the direction of the government of Israel’s rightwing prime minister, Benjamin Netanyahu, although he did not name Netanyahu directly.

Peres said he believed the values he and Rabin, who was assassinated in 1995, had inherited from Israel’s founding father, David Ben-Gurion, were in jeopardy as he defended a two-state solution to the Israeli-Palestinian conflict.

“Israel should implement the two-state solution for her own sake, because if we should lose our majority, and today we are almost equal, we cannot remain a Jewish state or a democratic state.

“That’s the main issue, and to my regret they [the government] do the opposite.”
Born in Wiszniewo, Poland, Peres emigrated to British Mandate Palestine in 1934 at the age of 11, was a founder of the Labour-Zionist Youth Movement and a member of the Hagana Jewish military forces before Israel declared independence.

During a decades-long career, he occupied almost every significant position in Israeli political life. His first role was as director general of Israel’s Ministry of Defence in his 20s, as a protégé of Ben-Gurion, involved in the secret planning of the Suez offensive with Britain and France in alliance against Gamal Abdel Nasser’s Egypt.
First elected to the Israeli parliament, the Knesset, in 1959, his cabinet roles included the defence, finance and foreign affairs portfolios before he served two brief periods as prime minister. Although he ran for prime minister five times between 1977 and 1996, he never won a national election outright.

A noted hawk in the 1970s who had deep reservations about territorial compromise with the Palestinians and supported settlement building and the building up of Israel’s military strength, by the 1980s he had begun to move from the centrist political position he occupied towards the peace camp.
Peres had had several health scares this year and was admitted to hospital twice because of heart problems. In the first case, the hospital said he had suffered a “mild cardiac event” and underwent catheterisation to widen an artery. He was rushed to hospital again just days later with chest pains and an irregular heartbeat.