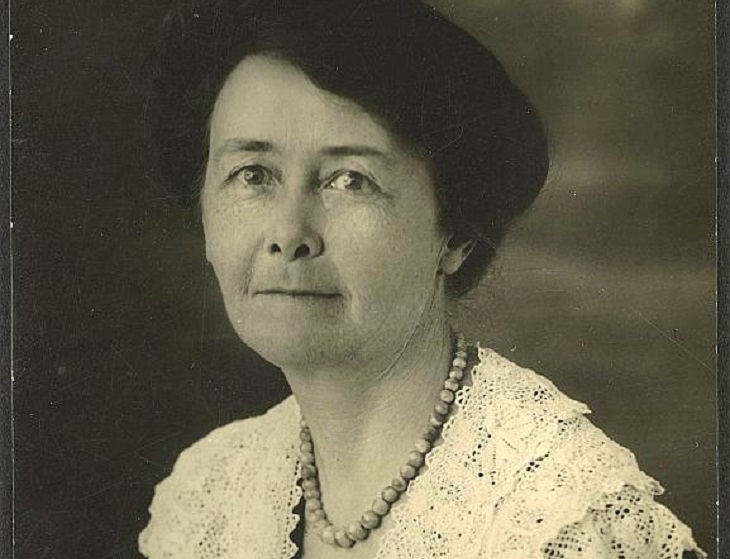 Stella Maria Sarah Miles Franklin, known as Miles Franklin (14 October 1879 – 19 September 1954) was an Australian writer and feminist who is best known for her novel My Brilliant Career, self-published in 1901. While she wrote throughout her life, her other major literary success, All That Swagger, was not published until 1936.

She was committed to the development of a uniquely Australian form of literature, and she actively pursued this goal by supporting writers, literary journals, and writers' organisations. She has had a long-lasting impact on Australian literary life through her endowment of a major annual prize for literature about "Australian Life in any of its phases", the Miles Franklin Award. Her impact was further recognised in 2013 with the creation of the Stella Prize, awarded annually for the best work of literature by an Australian woman.

Life and career
Franklin was born at Talbingo, New South Wales, and grew up in the Brindabella Valley on a property called Brindabella Station. She was the eldest child of Australian-born parents, John Maurice Franklin and Susannah Margaret Eleanor Franklin, née Lampe, who was the great-granddaughter of Edward Miles (or Moyle) who had arrived with the First Fleet in the Scarborough with a seven-year sentence for theft. Her family was a member of the squattocracy. She was educated at home until 1889 when she attended Thornford Public. During this period she was encouraged in her writing by her teacher, Mary Gillespie (1856–1938) and Tom Hebblewhite (1857–1923) editor of the local Goulburn newspaper.

Her best known novel, My Brilliant Career, tells the story of an irrepressible teenage girl, Sybylla Melvyn, growing to womanhood in rural New South Wales. It was published in 1901 with the support of Australian writer, Henry Lawson. After its publication, Franklin tried a career in nursing, and then as a housemaid in Sydney and Melbourne. Whilst doing this she contributed pieces to The Daily Telegraph and The Sydney Morning Herald under the pseudonyms "An Old Bachelor" and "Vernacular." During this period she wrote My Career Goes Bung in which Sybylla encounters the Sydney literary set, but it was not released to the public until 1946.

In the United States and England
In 1906, Franklin moved to the US and undertook secretarial work for Alice Henry, another Australian, at the National Women's Trade Union League in Chicago, and co-edited the league's magazine, Life and Labor. Her years in the US are reflected in On Dearborn Street (not published until 1981), a love story that uses American slang in a manner not dissimilar to the early work of Dashiell Hammett. Also while in America she wrote Some Everyday Folk and Dawn (1909), the story of a small-town Australian family, which uses purple prose for deliberate comic effect. She suffered regular bouts of ill health and entered a sanatorium for a period in 1912. In 1915, she travelled to England and worked as a cook and earned some money from journalism. In March 1917 Franklin volunteered for war work in the Ostrovo Unit of the Scottish Women's Hospitals during the Serbian campaigns of 1917–18. She served as a cook in a 200-bed tent hospital attached to the Serbian army near Lake Ostrovo in Macedonia Greece from July 1917 to February 1918. From 1919 to 1926 Franklin worked as Secretary with the National Housing and Town Planning Association in London. She organised a women's international housing convention in 1924. Her life in England in the 1920s gave rise to Bring the Monkey (1933), a satire on the English country house mystery novel. Unfortunately the book was a literary and commercial failure.

Return to Australia
Franklin resettled in Australia in 1932 after the death of her father in 1931. During that decade she wrote several historical novels of the Australian bush, although most of these were published under the pseudonym "Brent of Bin Bin". New South Wales State Librarian, Dagmar Schmidmaier, said "Miles increasingly feared that nothing she wrote matched the success of My Brilliant Career and resorted to writing under different names, including the bizarre pseudonym Brent of Bin Bin, to protect herself from poor reviews." However, All That Swagger was published under her own name in 1936.

Throughout her life, Franklin actively supported literature in Australia. She joined the Fellowship of Australian Writers in 1933 and the Sydney P.E.N. Club in 1935. She encouraged young writers such as Jean Devanny, Sumner Locke Elliott and Ric Throssell and she supported the new literary journals, Meanjin and Southerly. Miles entertained literary figures at her home in Carlton, NSW. An autograph book known as Miles Franklin's Waratah Book held by the State Library of NSW was used for autographs and inscriptions. Guests were encouraged to drink tea from the Waratah Cup and to write in the Waratah Book.

Miles Franklin's waratah cup and saucer 1904. This cup is part of the collection of the State Library of NSW In 1937, Franklin declined appointment as an Officer of the Order of the British Empire.

Collaborations
Miles Franklin engaged in a number of literary collaborations throughout her life. In addition to co-editing the journal Life and Labor with Alice Henry in the US, she also wrote Pioneers on Parade in collaboration Dymphna Cusack and Joseph Furphy (1944) "in painful collaboration with Kate Baker". Previously, in 1939, she and Baker had won the Prior Memorial prize for an essay on Furphy.

Dever writes that the letters between Dymphna Cusack and Miles Franklin that are published in Yarn Spinners "provide a see-sawing commentary on the delicate art of literary collaboration".

While Miles Franklin had many suitors, she never married. She died on 19 September 1954, aged 74 and her ashes were scattered in Jounama Creek, Talbingo close to where she was born.

Legacy
In her will she made a bequest for her estate to establish an annual literary award known as The Miles Franklin Award. The first winner was Patrick White with Voss in 1957.

The Canberra suburb of Franklin and the nearby primary school Miles Franklin Primary School are named in her honour. The school holds an annual writing competition in her memory.

During her lifetime Miles Franklin donated several items to the Mitchell Library. Manuscript material was presented over the period 1937–1942. The various drafts of "Pioneers on Parade" were presented in 1940. She bequeathed her printed book collection, correspondence and notes as well as the poems of Mary Fullerton.

A revival of interest in Franklin occurred in the wake of the Australian New Wave film My Brilliant Career (1979), which won several international awards.