Bangladesh among top targets of US manufacturers facing tariffs in China 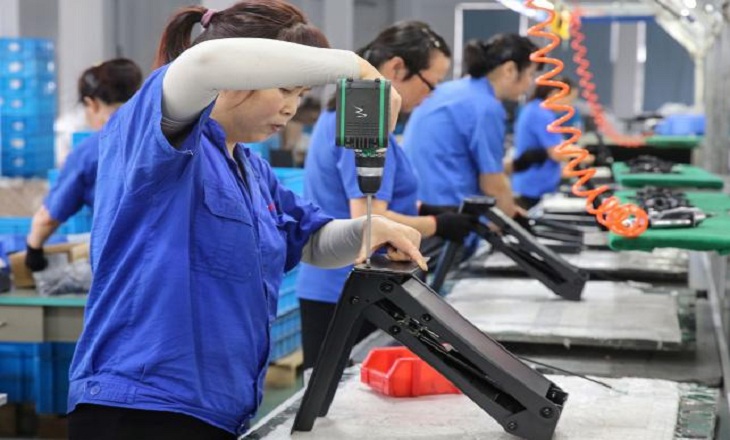 As fresh US tariffs on Chinese imports kick in, Illinois-based phone accessories manufacturer Ben Buttolph has been urgently moving production to other Asian countries despite the cost, inconvenience and deep uncertainty.

Buttolph, chief finance officer at Xentris Wireless, expects that his company will never return to China after completing a move that he describes as "a kind of business 'head trauma'."

"It's a huge inconvenience, it's a huge expense," he told AFP after Xentris set up in the Philippines, Taiwan and Vietnam since the trade war between the US and China erupted 18 months ago.

But manufacturing in other developing nations comes with risks, he admitted.

"Building up these supply chains took 30 years in China. China has a lot of infrastructure that some other countries don't yet have.

"We are trying to have multiple locations certified for all of our products, so that if all of a sudden there's an issue with one of the locations, we just flip the switch."

Reflecting on the impact of tariffs on China, he said: "We're never going to be in that position again diversification was one of the intentions we had."

US president Donald Trump's plan to enact 15 per cent tariffs on $300 billion in consumer goods imported from China has forced some manufacturers such as Xentris to shift production from the country, while others have absorbed the tariff or raised prices.

The latest round of levies began on Sunday on about $112 billion worth of Chinese goods, according to an analysis by the Peterson Institute for International Economics. The remaining portion of the tariffs are set to take effect on 15 December.

"We are leaving China and we have no immediate or long-term plans to ever go back," Buttolph said, recalling how his company, which has 68 US employees, sought legal advice on the strategic outlook when the trade war began.

"(Some companies) anticipated that this whole thing was going to blow over and that Xi Jinping and Donald Trump would cut a deal. Our assumption early on was based on advice that this is going to be an ongoing, long-term problem.

"Chances are that it will never be the same in China. There were a lot of folks in the consumer electronic space who may have dragged their feet in terms of setting up relationships and getting the supply chain moved."

Richard Roberts, import logistics manager at California-based PacSun, a lifestyle clothing company, echoed the sentiment that production must move out of China even in the face of weaknesses in nations that offer a cheaper alternative.

"The latest round of tariffs is making it almost impossible to import from China," said Roberts.

"This calendar year we are planning to move up to 30 percent of what we produce in China to Sri Lanka, Bangladesh and Pakistan."

THE COST OF CHANGE

"You're going to have delays with factories not knowing how to make the correct timing. Roadways are not built, so containers are taking longer to get to the port," Roberts said.

"You also have to take into consideration the longer transit time. You go from Shanghai, where it's 10 or 12 days by vessel, to something coming out of India that's 30 days, so that's a disruption to your supply chain.

"We have Trump (as president) and it's his agenda, so... what do you do? Your company has to do what it needs to do."

For international law firm Harris Bricken, which helps companies navigate working abroad, partner Dan Harris said the US tariffs on China have caused his business to "go crazy" as companies seek help to avoid tariffs often by moving their production from China.

US and Chinese talks are due to resume this month after a sharp deterioration in the trade war in August.

The chances of a breakthrough look slim after Trump tweeted that China was "hemorrhaging jobs and companies" and that Chinese negotiators may be holding out for a better deal in the hope he would lose next year's elections.

Tom Case, a customs broker for 50 years and president of The Camelot Company, a customs brokerage company near Chicago's O'Hare Airport, said that the costs would ultimately be passed onto the US consumer.

"The guy that's losing is the guy that goes to the store to buy a new screwdriver," he said.

Buffalo farms at the sand bars of Meghna