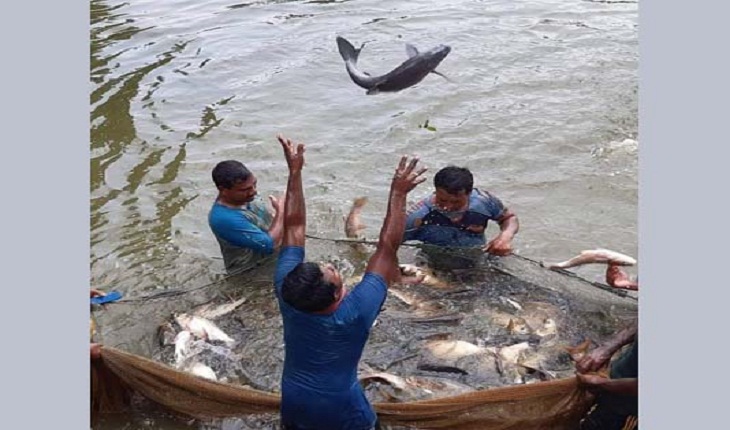 Rajshahi Krishi Unnayan Bank (RAKUB) has disbursed loans of around Taka 10.11 crore for fish farming in northern districts during the first six months of the current 2020-2021 financial year, officials said.

The state-owned specialized bank distributed the loan among 6,959 commercial fish farmers in all 16 districts under Rajshahi and Rangpur divisions aimed at boosting fish production.

“We have disbursed the loan mostly from the Prime Minister’s stimulus package fund through different branches in the country’s northwest region to increase fish production in the backdrop of the Covid-19 fallout,” said Muhammad Idrish, Managing Director-in-Charge of RAKUB.

The bank has set a target to disburse Taka 50 crore loan for fish farming in the current fiscal. He said another Taka 2.78 crore were also handed over among 666 fish farmers under the bank’s fisheries village scheme to increase the number of commercial fish farmers in the region as it has enormous prospects of boosting fish production.

After taking advantage of the loan facilities, many of the farmers have availed the opportunities of recouping their losses caused by the adverse impact of Covid-19 pandemic besides the devastating flood that occurred last year.

“I have received a loan of Taka 35 lakh around four to five months back and revived my business at present,” said Sultan Mahmud, a fish farmer in Raninagar area of Rajshahi city.

He started his business in 25 bigha of water bodies with initial investment of Taka eight lakh around 12 years back and gained success with formation of a running capital of around Taka one crore. But his business was affected badly by the pandemic, he said.

Sultan said a special credit program for boosting fish production of RAKUB has contributed a lot towards popularizing the commercial fish farming process everywhere in the country’s northwest region.

The bank has operated the programme styled “RAKUB fisheries village” for extensive fish cultivation to create employment opportunities along with fulfilling protein deficiency in the region.

The main objective of the programme was to encourage small farmers in fish
farming so that they could produce more fish in the small ponds and other water-bodies using modern and scientific technologies instead of traditional ones.

The programme gives emphasis on forming fisheries villages with at least 10-12 small ponds and other water bodies at potential places.

Muhammad Idrish said there is a bright prospect for increasing fish production in all the northern districts with optimum use of the existing natural resources.

Taking advantage of the situation, he said the bank has selected the fisheries sector on priority basis supplementing the government’s efforts to bolster both rural and urban economy.

At the preliminary stage, the RAKUB Chief said most of the upazilas and union-level branches in 16 districts have been disbursing the special loan successfully.

Requisite funds have been disbursed among the interested fish farmers during the period.

The bank has established an easy process for extending necessary credits to small and medium fish cultivators so that they can contribute to the economic growth of the country side by side with taking the region from the curse of poverty.

In addition to raising skilled fish farmers, the scheme helps increase fish cultivation through providing them with special facilities, the RAKUB chief added.

Headquartered in Rajshahi, the bank has achieved a significant success in making the region surplus with food through quality consumer services.

In the first phase, cultivation of various species of fish, especially pungus, carp, monosex tilapia and thai koi, has been selected for investment.

The programme has a provision of sanctioning loans up to Taka five lakh in different potential and prospective fields.

The farmers having experience of fish farming and at least a four-week training programme on improved fish cultivation would be given preference to get the loan.

Muhammad Idrish said the programme is ensuring easy credit facilities to the small fish farmers as a vital force for poverty alleviation and national economic growth.