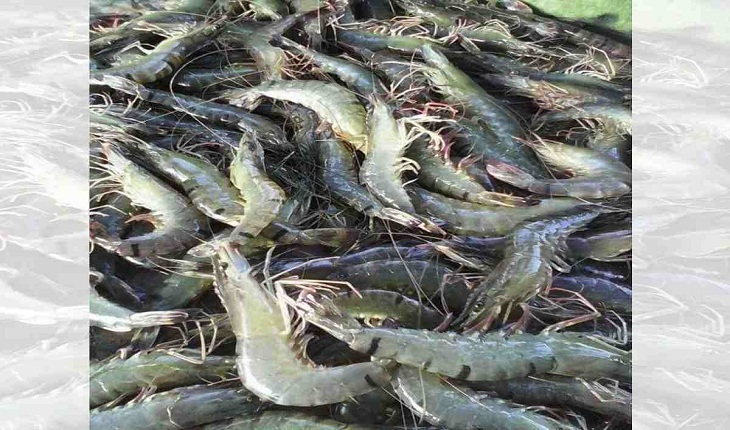 The shrimp farmers in Khulna district are struggling to cope up with the Covid-19 pandemic effect amid the low price of shrimp.

At the beginning of the pandemic, the shrimp farmers were counting a huge loss due to the high price of fish fry and fish feed and the drop in shrimp prices also added to their woes during the outbreak.

The frozen shrimp organisations have stopped collecting shrimp from the farmers. As a result the prices of shrimp have fallen in the local market, which affected the shrimp farmers badly.

Toufique Mahmud, fish inspection and quality control inspector, said a total of 29,540 metric tonnes of shrimp has been exported from Khulna region in the 2019-2020 fiscal year. The market value of the shrimp was Tk 2,360 crore.

But in the current 2020-2021 fiscal years, some 21,490 metric tonnes of shrimp has been exported and the price of the shrimp was found Tk 1,571 crore, which showed a good sign in the export sector, he said.

Mohammad Mazinur Rahman, deputy director of fish inspection and quality control office, Khulna, said “The shrimp export has declined in a remarkable position in the first two to three months due to Covid-19 pandemic but later it came to normal and the overall export number is better now.”

Koushik Bagchi, a shrimp farmer in Dumuria upazila, said "I have started to cultivate shrimp in my enclosure since 1997 as Galda and Bagda shrimp cultivation has proved to be a profitable business. Though we have suffered a loss due to pandemic as the price of 20 grade shrimp was sold at Tk 520-530 which was Tk 830-840. My monthly income at the beginning was Tk 1.5 lakh but during the pandemic period it comes down to Tk 50,000.”

“Now I have taken preparation to cultivate shrimp to earn profit and developed fish enclosures,” he said.

Hridoy Sing, another fish farmer, said “We have been going through some problems in selling shrimps during the pandemic and counted a huge loss in the past several months. I hope that we can earn more in the New Year but it did not happen.”

Mohammad Abu Bakar Siddique,  upazila fisheries officer in Dumuria Upazila, said “The farmers have to purchase the shrimp fish fry at a high price. In the past, one thousand fish fry was being sold at Tk 1000 but now it is being sold at Tk 3,000. Besides, the price of fish feed is also high which is responsible for the loss.”

Now one kg good quality shrimp is being sold at Tk 500-700 which was earlier Tk 1600-1800, he said.Already the government has disbursed a stimulus package among the affected farmers and Tk 6.22 crore has been provided to 4,114 farmers under six categories in Dumuria upazila.

Mohammad Abu Syed, Khulna district fisheries officer, said “The fish farmers failed to collect shrimp in the right time due to covid-19 pandemic situation. Besides, there were some barriers in the shrimp cultivation including feed crisis and labour crisis which causes a loss in this sector.”