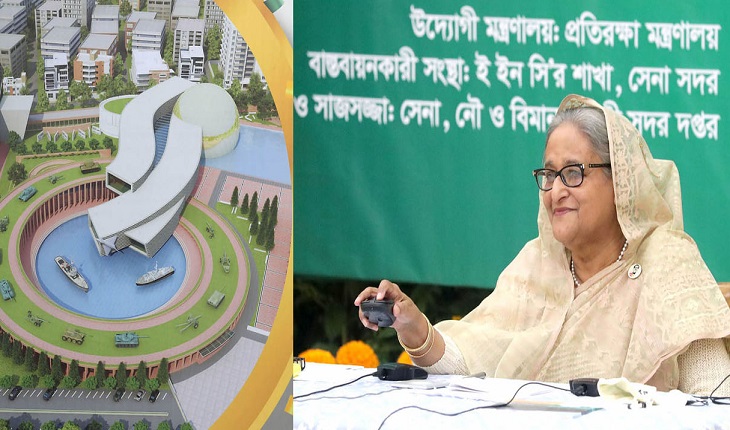 Prime Minister Sheikh Hasina today said the state of the art Bangabandhu Military Museum (BMM) would inspire the young generation to join the armed forces to protect the country's independence and sovereignty.

"Young generation will be encouraged being imbued with patriotism by the Bangabandhu Military Museum and to join the armed forces---army, navy and air forces---to defend the country's independence and sovereignty," she said.

She came up with the statements while inaugurating the museum virtually from her official Ganabhaban residence here.

The premier said the museum would be a milestone initiative for the country's armed forces through which the youths would know about the armed forces' contribution to the independence alongside the real history of the great Liberation War.

It would also be a "place of inspiration" for the armed forces personnel who have been working in various peacekeeping missions abroad to maintain the global peace, she mentioned.

She said, "They (Bangladeshi peacekeepers) will get self-satisfaction through establishment of the museum."

The prime minister said that her government would make the museum more modern and time-befitting as it would be the world's best military museum for its beauty and technology.

She added separate galleries for the army, navy and air forces to showcase their glory and contribution to the Liberation War, peace keeping missions and other works will attract the youths to join the armed forces with a patriotic zeal to protect the country's independence and sovereignty.

But, the reality is that Bangladesh believes and maintains the foreign policy "Friendship to all, malice to none" adopted by Father of the Nation Bangabandhu Sheikh Mujibur Rahman, she said.

The prime minister said they have taken time-befitting measures for the overall development of the armed forces following the footprints of the Father of the Nation referring to various steps taken by her government since 1996.

Sheikh Hasina said she had to face two cases each for building a planetarium, purchasing MIG-29 planes for the air force and frigates for the navy, adding that she did not know why the cases were filed against her.

"But, they were not able to prove anything against me," she said.

The Bangabandhu Military Museum was built on 10 acres of land on the west side of the Bangabandhu Novo Theater where equipment of the military, before and after the independence, would be presented.

To educate people about the glorious history of the Bangladesh military forces, Bangladesh Military Museum was established in 1987 in Mirpur Cantonment which was later shifted in 1992 to the present location on the west side of Bangabandhu Planetarium along Bijoy Sarani Road in Dhaka.

The military museum was upgraded under a grand initiative to modernize it which has led to the development of a state of the art establishment that will be known as 'Bangabandhu Military Museum'.

The museum promises to provide authentic information to the country's people, specifically the new generation, about the glorious past, challenges, achievements, and key developments of the Bangladesh Army, Navy and Air Force. The information displayed can also be used for research purposes.

The prime minister said her government has been trying to set up more places of amusement for the people.

"There is a planetarium, a children's park and the military museum in one place. With everything, the Bijoy Saroni is a beautiful place. I hope the Bijoy Saroni will give the people the test of victory," she said.

Sheikh Hasina said the Father of the Nation had built army, navy and air forces as the symbol of an independence and sovereign country.

Bangabandhu had also established a military academy for the training of the armed forces personnel alongside rebuilding a war-ravaged country and working for socio-economic development of its people within only three and a half years of his tenure.

The premier said Bangabandhu had purchased MIG-21 fighter plane after the Liberation War for the development of the air force.

The Father of the Nation along with most of his family members were assassinated on August 15, 1975 when he called for the second revolution to ensure country's socio-economic development and reach democratic rights to the grassroots people, she said.

"We have lost near and dear ones through the killings. But, what had Bangladesh lost by the killings?" she said.

The prime minister said that Bangladesh had derailed from the spirit of the Liberation War after the assassination of the Father of the nation and the entire journey towards advancement was halted and people did not get anything.

Assuming office after 21 years, she said that the Awami League government had taken the measures to make the armed forces modern and build Bangladesh in such a way as it can move before the world with keeping its head high.

The premier said they have opened the private sectors to generate employment in the first tenure of the AL government.

"It (first five year) was a golden era for Bangladesh. The people of Bangladesh realised that they can even get a beautiful life. We have proved that the government is the servant of the people," she said.

After coming to power in 2009, the prime minister said they have made Bangladesh a developing nation as per the election pledge of 2008.

It had been possible due to specific and planned measures taken by her government, she added, vowing to transform the country into a developed and prosperous nation by 2041.

PM for continuing friendly relations with all countries