PM sure of AL victory in next election

‘Don’t let the sure victory slip away’, she asks party followers 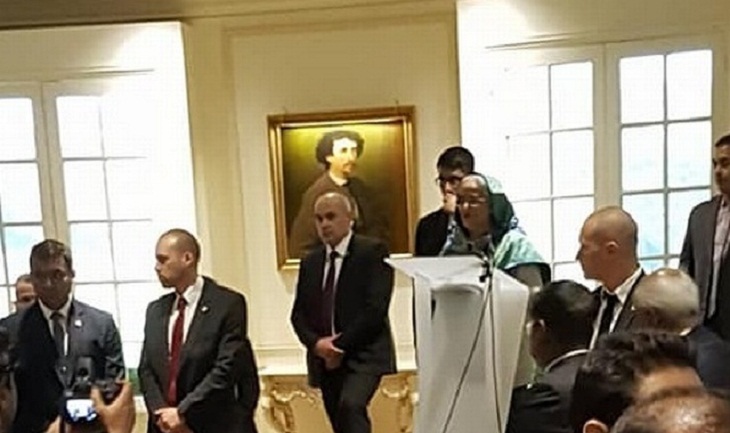 Confident about Awami League’s victory in the next national election, Prime Minister Sheikh Hasina has asked the party leaders and activists to remain alert so that the ‘sure victory’ must not slip away just for intra-party conflicts.

"Election is getting closer…it’s knocking on the door. We’ve to win the election…people are with us…they’re ready to vote for us," she said.

The Prime Minister said this while speaking at a civic reception accorded to her by the French chapter of Awami League at the Intercontinental Paris Le Grand (Opera) here on Tuesday night.

Sheikh Hasina said all have to remain alert so that no one can conspire against the victory of Awami League in the 11th national election which is scheduled to be held in December next.

"If there’re differences [of opinion] among ourselves, there’s a possibility for the conspirators to hatch conspiracies. If we remain united no one can harm us by hatching conspiracies, all have to remember this,” the PM said hoping, “Awami League will be reelected and the march forward of the country will continue, InshaAllah."

She put emphasis on strengthening the party and removing all the differences among the party activists through discussions.

Hasina said the Election Commission has already announced that the next election will be held in December next year, and if this is so the government has at best nine months in hand.  "We want to complete our development projects very quickly so that the benefits of these projects could be taken to the people of the country."

She also mentioned that no one will be able to stop the country’s advancement that has been started during the Awami League government.

But, Hasina said, all must remain alert so that those who had handed over the national flag that got stained with the blood of millions of martyrs to Al Bard, Razakar, Al Shams, war criminals, and given jobs to the killers of the Father of the Nation cannot return to power. "The anti-liberation and anti-independence elements must not return to power.”

Praising the expatriate Bangladeshis for contributing a lot to the country's economy, the PM urged them not to do anything which will tarnish the image and honour of the country.

Hasina highly criticized the BNP-led alliance who had burnt hundreds of people through hurling petrol bombs , 582 polling centers, and hundreds of copies of the holy Quran at Baitul Mukarram in the name of resisting the 2014 general election.

About the huge influx of forcibly evicted Myanmar citizens to Bangladesh, Hasina said her government has given them shelter on humanitarian ground as over one crore people of Bangladesh had taken refuge in India during the Liberation War in 1971.

Terming Myanmar as a next-door neighbour of Bangladesh, Hasina said her government is trying to resolve the problem without damaging the friendly ties with that country.

Mentioning the huge international support to Bangladesh over the Rohingya issue, she said a joint working committee has been formed and its members of the Myanmar side will visit Bangladesh this month to discuss the issue and her government will return the Rohingya people to their homeland.

Referring to her bilateral meeting with French President Emmanuel Macron, Hasina said detailed discussions were held with him to boost French investment in Bangladesh as well as enhancing bilateral trade and commerce.

The Prime Minister highlighted the various successes of her government and said when Awami League remains in power, the common people get something and real development is ensured.