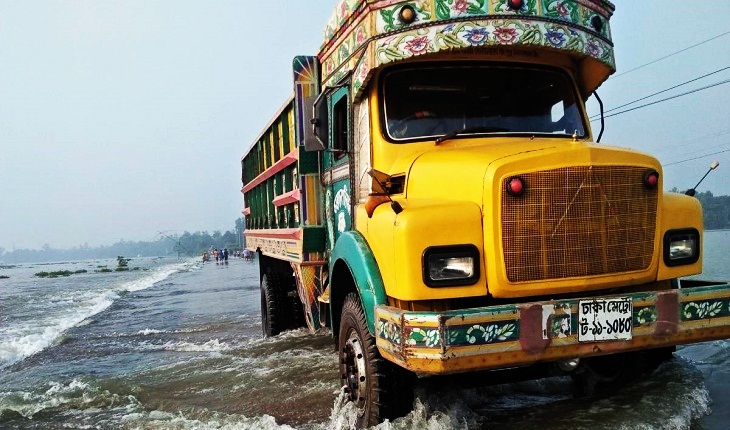 The sudden swelling of the Old Brahmaputra River has led to the inundation of new Char areas, croplands and houses in the district, triggering fears of a devastating flood.

Water Development Board said the river rose by three feet within 24 hours and was flowing just below the danger level at Sherpur Ferryghat Point at 6am on Thursday.

Sherpur’s relief office said 172 villages in 35 unions of five upazilas had been flooded after heavy rains in the country and upstream regions adjacent to Bangladesh, leaving at least 63,000 people stranded.

Anowara Begum, the district’s fisheries officer, said the flooding of ponds and fish enclosures have caused an estimated damage of Tk 5.18 crores.

Fifty-two educational institutions have been forced to suspend academic activities after they had gone under water.

The rising water is also causing panic among the people. Locals said new areas were suddenly submerged after 8pm on Wednesday and the Sherpur-Jamalpur Highway Porar Dokan diversion had gone under knee deep water within the night.

Only a small number of vehicles were seen on the road in the morning.

Sherpur’s road communication with Dhaka and the northern region will be cut off if the situation does not improve.