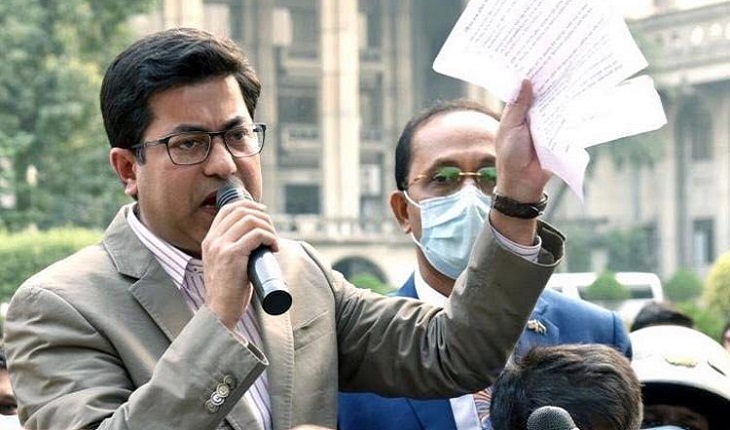 Dhaka South City Corporation (DSCC) Mayor Sheikh Fazle Noor Taposh has said he is agreed with the demands of students protesting the death of Naim Hasan and demanded capital punishment for the killers.

"I can feel the pain. I don’t come to do politics with the death of a meritorious student like Naim Hasan in the road within my DSCC jurisdiction by a vehicle of my city corporation . . . I am not only agreed to your all demands but also want the death penalty for the culprits,” he said.

The DSCC mayor came up with the remarks while addressing the protesting students outside the Nagar Bhaban in the city this afternoon.

Earlier, students of Notre Dame College took a position in front of Nagar Bhaban since this noon as part of their protest over the death of Naim Hasan.

Expressing solidarity with the demands of the agitating students, Taposh said he does not want to see such death on the roads of this city.

“I promise to eliminate all irregularities in the DSCC. But we have to remain within the law. We should abide by the government rules and regulations,” he said.

The driver of the vehicle responsible for Naim’s death was bound to drive the vehicle following the regulations, the mayor said, adding that he did not perform his duty properly since he had hired another driver to run the vehicle.

“We have temporarily suspended the driver who was assigned for driving the vehicle and will sack him permanently, In Sha Allah,” said Taposh.

The driver, who is responsible for Naim’s death, is just a killer, he said, adding “We will In Sha Allah ensure capital punishment for him,” he added.

Naim Hasan 17, a 2nd-year student of Notre Dame College was killed when a garbage truck of DSCC hit him at Golchattar in the city’s Gulistan area.