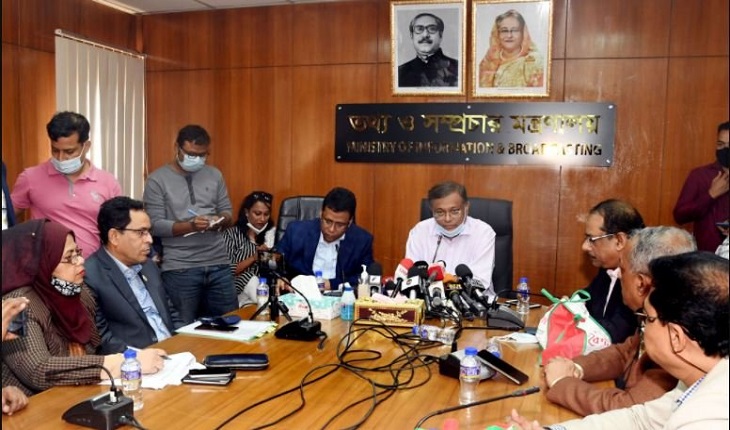 "It is clear that BNP has influenced the statements of doctors for political purposes. In addition, most of the doctors, who gave the statements, are involved with the politics of BNP," he told reporters at the meeting room of his ministry at Secretariat here.

Hasan said, "I saw in television that executive director of Ziaur Rahman Foundation Professor Dr Farhad Halim Donar gave a statement. The Doctors Association of Bangladesh also issued another statement as well as another doctor conducted a press conference yesterday."

"All of them are involved with the politics of BNP. And these doctors told that the treatment will be possible in the United Kingdom only," he said.

Besides, the doctor told that the treatment of Khaleda Zia is also available in Germany and the USA, he said, adding there is no treatment in India, Singapore and Bangkok according to the doctors.

But the reality is that many people go to Singapore and Bangkok from Europe and the USA to receive these types of treatments, he said, adding "How the doctor told that the treatment is available only in the United Kingdom where Tarique Rahman is staying and his neighbouring states- Germany and the USA?."

Replying to a query over a comment of BNP Secretary General Mirza Fakhrul Islam Alamgir, the minister said if the BNP secretary general made such comments then they are plotting to create anarchy across the country.

"And I think a criminal case can be lodged against him for his statement as he confessed that he is planning for creating instability. They created much chaos in the past. But the countrymen would not allow them to create instability more" he added.

It is mentionable that Mirza Fakhrul has said that tougher movement would be waged if Khaleda Zia is not sent abroad for treatment.

Earlier, the minister met the representatives of the TV Cable Network Operator.

About the meeting with the cable operators, Hasan said the operators have taken preparations and set up digital heads in metropolitan cities including Dhaka and Chattogram. The operating system will be digitised if every customer has the set-top box and the customers will be able to watch TV without interruptions, he added.

Hasan, also Awami League joint general secretary, said the minister said the government will also be benefitted as it would be able to earn Taka 15 crore to Taka 18 crore as revenue each year.

Later in the evening, Hasan inaugurated the digital lab of Dhaka Reporters Unity marking the annual general meeting of the organization at Segunbagicha here.

'Bangladesh is advancing at indomitable pace under PM'