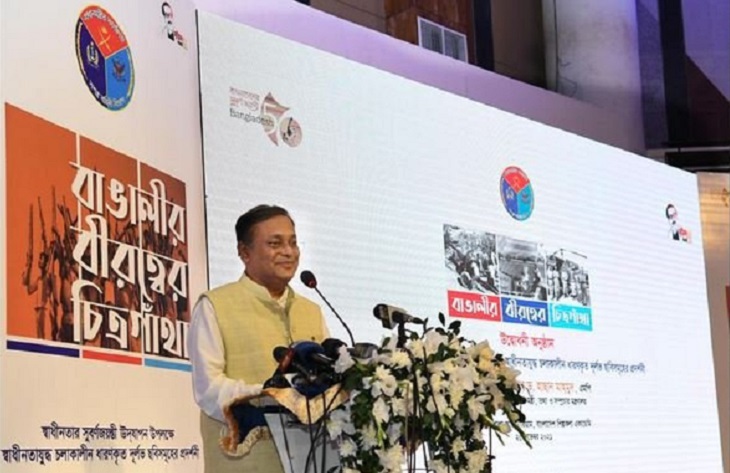 Information and Broadcasting Minister Dr Hasan Mahmud today said everyone would have to remember the tale of heroics and honour the heroes of the past for advancing the state.

“There are no many photographs of the great Liberation War and the photographs will be destroyed if those are not preserve properly. The initiative of preserving the photos in an album through compiling is really very praiseworthy,” he said, addressing the three-day long exhibition of rare photographs snapped during the Liberation War.

The Armed Forces Division (AFD) organized the exhibition marking the golden jubilee of the Independence at Chithrashala auditorium at Shilpakala here.

Hasan, also Awami League joint general secretary, extended thanks to the AFD for organising the exhibition and publishing the album.

He said the Bangalee nation achieved independence through shedding blood under the leadership of Father of the Nation Bangabandhu Sheikh Mujibur Rahman in 1971 in the history of five thousand years of Bangalees for the first time. Earlier, Fakir Majnu Shah revolted in 1786, Titumir made Bansher Killa in 1831, Surya Sen looted Chattogram Jail in 1930 and Netaji Subhash Basu showed dream for independence in 1944, but freedom has not come.

On the other hand, Bangabandhu inspired the Bangalees and crores of people to take part in the Liberation War. And the independence has been achieved in exchange for the lives of 30 lakh people, he added.

He said, “I saw the Liberation War in my childhood. Many people in my village were killed. I also thought to join the war. But I was too minor. But our freedom fighters and our armed forces had fought. We achieved independence with the blood of Hindus, Muslims, Buddhists, and Christians.”

He said Father of the Nation Bangabandhu Sheikh Mujibur Rahman had realized that the freedom of Bangalees is not possible in the system of the Pakistani state, which was formed on the basis of religion.

“We are a proud nation in the year of the golden jubilee of the independence. We want to build such a nation that will have intellect, thoughts, human values, and modern knowledge.

The exhibition will remain open from 11 am to 8 pm till November 27 under the management of the Bangladesh Navy.

In the evening, the minister joined a premier show of the film ‘Nonajoler Kabbyo’, a joint venture of Bangladesh and France at Star Cineplex in the city’s Mohakhali.

Praising the role of director Rezowan Shahriar Sumit in making the film, the minister urged the new generation to come forward in advancing the film industry.