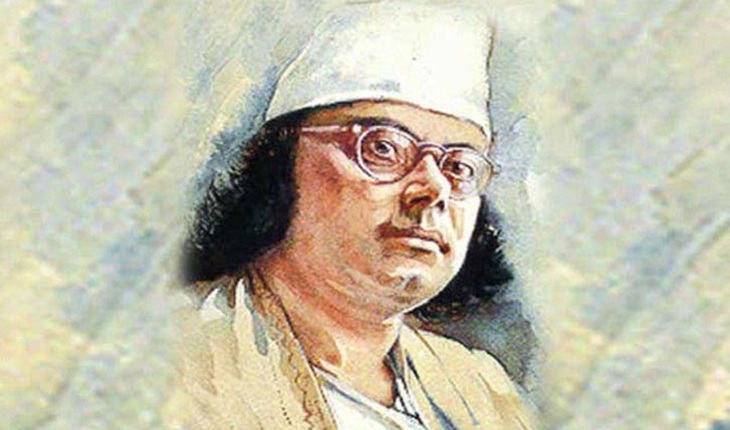 The 122nd birth anniversary of National Poet Kazi Nazrul Islam was celebrated today on a limited scale maintaining the health guidelines amid the coronavirus pandemic.

Marking the day, State Minister for Cultural Affairs KM Khalid, on behalf of his ministry, placed a wreath at the grave of the poet besides the central mosque of Dhaka University at 7.30 am.

Besides, the Dhaka University (DU) authority, led by its Vice-Chancellor Professor Dr. Md Akhtaruzzaman, also placed a wreath at the grave of the poet with a procession.

On this occasion, doa and fateha were offered to seek the eternal peace of the poet’s departed soul. DU teachers, students, and officials were present on the occasion.

AL General Secretary and Road Transport and Bridges Minister Obaidul Quader along with the party’s central leaders laid wreaths at the poet’s Mazar on the occasion.

Earlier, on Monday, President M Abdul Hamid and Prime Minister Sheikh Hasina issued separate messages paying rich tributes to the memory of the poet on the occasion of his 122nd birth anniversary.

Kazi Nazrul was born on the 11th Joishtha in Bengali calendar year 1306 in Churulia, near Asansol in the Burdwan district of West Bengal.

He was famous for his fiery poem Bidrohi (The Rebel) and his many melodious songs. He was a poet, lyricist, musician, revolutionary, and philosopher.

The nation got inspiration from Nazrul’s poems and songs during the great Liberation War and all democratic movements and struggles.

There are 2,400 of his songs, and together, they are known as Nazrul-Geeti or Nazrul Sangeet. He composed the songs, which he liked to tune himself.

Considering his impressive talent, Rabindranath Tagore dubbed him Saraswati’sbor-putra (the gifted son of the Goddess of learning).

Nazrul was the poet of rebellion against injustice and taboos. His nickname was Dhukhu Miah (Mr. Sorrow). True to his name, Nazrul suffered a lot in his life.

His father died in 1910 while he was still at school and he became the breadwinner of the family working for a bakery company, Wahid’s, the most well-known in north Bengal at that time.

Later, he resumed studies at Darirampur, Trishal, Mymensingh. But he left his studies to join the British Indian Army as a non-commissioned officer and was posted to Karachi. He left the army and settled in Kolkata, where he started publishing a fortnightly, Dhumketu (The Comet).

The magazine had a fiery tone and was critical of British rule in India. He soon found himself in prison for publishing a poem written by him, “AnandomoirAgomone” (Advent of Goddess Durga-the Goddess of the destruction of all evil).

In prison, he did not stop writing. He wrote, “RajbandirJabanbandi” (Deposition of a political prisoner).

After a prolonged hunger strike, Nazrul was released from prison. But throughout the 1920s, he found most of his work banned. After the death of his second son- Kazi Bulbul- the poet was sad. He wrote, “My nightingale sleeps forever.”

Although known for his rabid criticism of imperialism, social and religious taboos, Nazrul also explored the themes of love, romance, and devotion.

He also introduced a robust style that was very bold and innovative. His use of Persian and Arabic words in Bengali poetry also opened up new literary horizons. In the 1930s, the leading gramophone company of India, HMV, as a lyricist, employed him full-time.

Later, All-India Broadcasting Authority employed him. But his luck once again ran out and in 1942, he developed a rare neurological disorder that led to the loss of his voice and memory. Doctors in Vienna diagnosed it as Pick’s disease.

After the independence of Bangladesh, Father of the Nation Bangabandhu Sheikh Mujibur Rahman brought Nazrul Dhaka from Kolkata with his family members and he was declared the national poet. He died here in 1976 and was buried beside the central mosque at Dhaka University.

In his short articulate years, he also wrote and directed a play, Byathar Dan (The gift of pain).