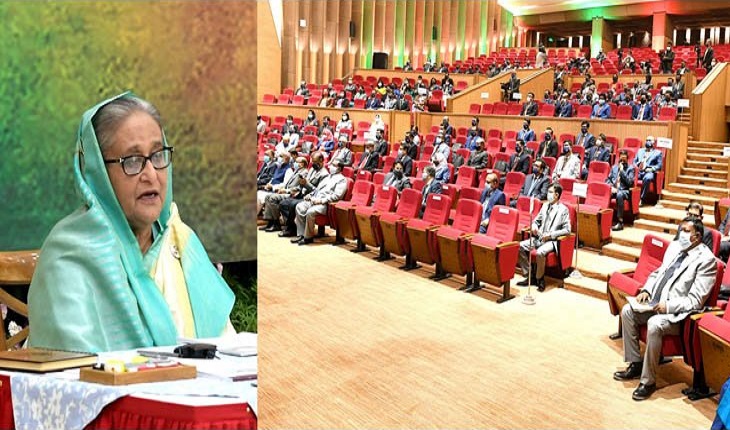 Prime Minister Sheikh Hasina today asked the Deputy Commissioners (DCs) to take care of the families of freedom fighters (FF) and ensure that they live a dignified life.

“I do not want to see family of any martyred begging (on the street). Welfare of freedom fighters is on the top of our all activities. Take note of this,” she told the DCs and the ministry concerned while inaugurating three-day DC conference after two years of lapse due to Covid-19 pandemic.

Joining virtually the conference held at the Osmani Memorial Auditorium from her official Ganabhaban residence here, the Prime Minister stressed the need for formulating a master plan up to the upazila level in coordination with the public representatives for ensuring overall development of the districts.

She asked the DCs to perform their lawful duties without any fear, saying, "Perform your lawful responsibilities remaining above all sorts of fear and greed to ensure people’s welfare.”

The prime minister asked the DCs to discharge their duties with the mindset of serving the people following the path of truth and justice for ensuring welfare of the commoners.

She also asked the government officials to make sure that the commoners aren't harassed in getting public services.

Sheikh Hasina asked the DCs and the concerned ministry to know about the situation of the families of freedom fighters in different areas and take necessary measures to ensure their dignified lives.

“It is not honourable for me if the family of a freedom fighter lives by begging,” she said.

The Prime Minister asked the DCs and Liberation War Affairs Ministry to find out whether any families of the freedom fighters or martyred freedom fighters or families which were victims of mass killings are now living miserable lives and take every measure required so that they can lead their lives in a dignified way.

She asked the DCs to conduct constant vigilance to ensure proper implementations of the projects taken by different ministries in co-ordination with the public representatives, including local lawmakers, district council chairmen, upzila and union parishad chairmen.

“If we work after formulating a master plan at district and upazila levels, there will be no problem. A deputy commissioner can play a big role to ensure the overall development of a district,” she said.

"I believe that with sincere efforts of all, establishing good governance and attaining inclusive growth will be possible for us to achieve the Father of the Nation's dream through building his Sonar Bangla (Golden Bengal)." she said.

The Prime Minister issued a 24-point directive to the DC’s to ensure the country's overall development aimed at transforming Bangladesh into a developed and prosperous country free from hunger and poverty by 2041 as envisioned by Father of the Nation Bangabandhu Sheikh Mujibjur Rahman.

"The country will advance constantly. I call upon you to focus on some issues (24 directives) out of the huge tasks you are doing," she said.

She thanked the Cabinet Division for arranging the DCs conference amid the Covid-19 pandemic as the conference was not held in the last two years due to the lethal virus situation.

The conference began at the Osmani Memorial Auditorium here with the presence of 15 ministers and secretaries in the inaugural ceremony amid the fresh surge of Covid-19.

A video documentary on the services to ensure people's welfare and works for implementing all the development plans of the government across the country by the field level administration was screened on the occasion.

Divisional Commissioner of Khulna Ismail Hossain, Deputy Commissioners of Chandpur and Rangpur Anjana Khan Majlish and Asif Ahsan also spoke on the occasion, on behalf of the divisional commissioners and DCs, respectively.

Sheikh Hasina reiterated her vow to give homes to all the homeless and landless under the Ashrayan Project.

“Not a single person will remain homeless and landless in the country,” the Prime Minister said and asked the DC’s to take prompt measures to bring all the landless and homeless people under the Ashrayan project.

She said money will be given to purchase lands for the landless from a fund raised at the PMO to this end if no khas land is found to build houses under the project.

“It is a big achievement to see the smiling faces of the people after getting homes,” she said.

The Prime Minister said a total of 33,51,955 people have so far been rehabilitated.

She asked the authorities concerned to take elevated projects for constructing roads in haor and beel (swamp) regions to protect the environment and ecological balance.

The Prime Minister said her government has been establishing 100 special economic zones across the country, adding that focus should be given on the major products of a particular region in case of producing, processing and marketing of those.

She stressed the need for inventing new products to expand the export basket.

The Prime Minister asked all concerned to ensure foreign investment in the food processing industry in the special economic zones.

She said the school feeding programme will have to be continued with the collective efforts of district administration, public representatives and local rich people which will help prevent school dropout.

Highlighting various measures taken by her government, the Prime Minister said that the country has achieved the status of a developing nation due to the steps taken by them.

"Now, our responsibilities have increased many folds, we have to advance further, because we have to transform the country into a developed and prosperous one," she said.

The Prime Minister said the country was moving fast towards achieving overall development, but the COVID-19 pandemic put hurdles on that advancement.

“We have taken various measures giving topmost importance to make Bangladesh free from poverty by improving the living standard of the grassroots people and we have to do more in this regard," she said.

The Prime Minister said they have taken elaborate programmes to ensure every civic amenity in the rural areas.