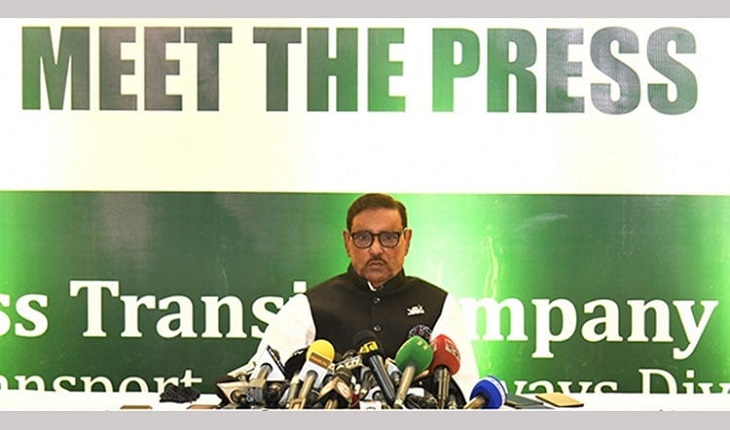 "To Awami League, safe exit means elections. If you want to change the state power, you will have to take part in polls. We are ready...join in polls. If the people don't vote us, we will follow a safe exit," he told reporters after joining an agreement signing ceremony.

The function was held at Bangabandhu International Conference Centre here. The agreement was signed to hire consultancy firm to monitor the construction work of Metro Rail-1 (MRT Line-1). Quader, also the road transport and bridges minister, said the Awami League leaders never flee away but the BNP acting chairman Tarique Rahman fled away the country.

Responding to the statements of BNP leaders, he said the way the BNP men came down on the streets with sticks and are giving the forecast of arson terrorism, BNP secretary general will have to find a safe exit. Criticising the figures of people joined the BNP's rallies; the AL general secretary said the BNP is very happy with its rallies, inviting the BNP leaders to attend an AL district rally to learn what is called a public rally.

"Seeing some waves, they think it's a wave of people," he added. About the obstacles in BNP's programmes, Quader said: "Don't forget your past. What has happened to us after being defeated! We could not hold the meeting on February 11 on the footpath in front of the Awami League office. What is the barrier? No BNP leader has been affected till date".

He said many senior AL leaders, including late Mohammed Nasim, Matia Chowdhury and late Abdus Samad Azad, were beaten mercilessly during the reign of the BNP and now the party is talking about the obstacles.

The AL general secretary said he could not stay at his house even for five days in five years during the BNP regime but Mirza Fakhrul Islam Alamgir is living in his home installing air condition.