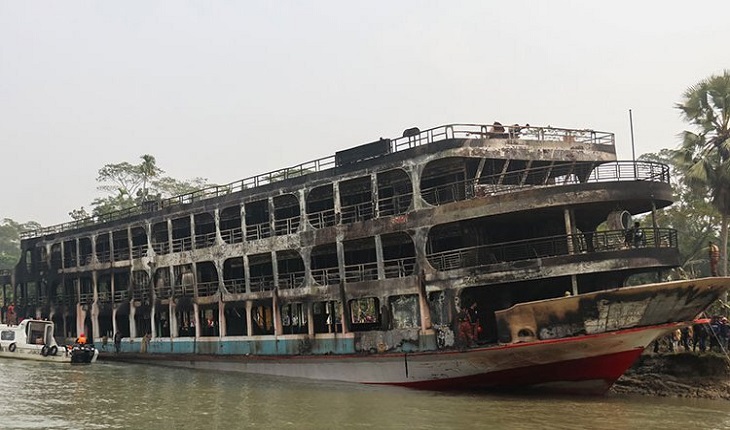 A court here today ordered prison authorities to produce three owners of Abhijan-10 launch before it on January 19 in a case lodged over the devastating fire that engulfed the vessel, killing 49 of its passengers recently.

The court passed the order as Department of Shipping Prosecuting Officer Bellal Hossain pleaded to show the three arrested in the case and produce them before the court.

Department of Shipping Chief Inspector Md Shafikur Rahman filed the case with the marine court on December 26 under sections 56/66 and 70 of Special Marine Act against eight.

According to the case documents, MV Abhijan started its voyage with several hundred passengers for Barguna from capital's Sadarghat Launch Terminal on December 23. As the vessel was crossing Nalchiti area of Jhalakathi, its engine room caught fire. In spite of the fire, the launch officials did not anchor even though they had enough time. The whole launch burnt on Sugandha River, turning many of its passengers to ashes.

As the launch officials did not take appropriate steps, 42 passengers (which have jumped to 49 till now) burnt to death and around 150 were seriously injured, the plaintiff said in his allegations.

The vessel did not have appropriate number of fire extinguishers, life boya, life jackets, sand boxes or buckets.

Indictment hearing in drugs case against Pori Moni, others on Jan 2