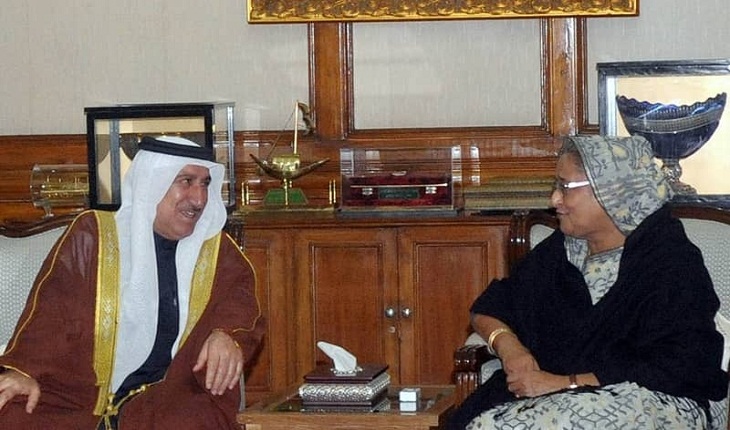 Prime Minister Sheikh Hasina on Sunday invited the entrepreneurs of the United Arab Emirates (UEA) to invest in Bangladesh’s Economic Zones for the mutual benefits of the two countries.

The Prime Minister came up with the invitation when the UAE Ambassador to Bangladesh Dr Saeed Bin Hajar Al Shehi met her at her official residence Ganobhaban.

He said various issues related to bilateral interests came up for discussions.

Referring to her government’s steps to establish 100 economic zones to industrialise the country, Sheikh Hasina said necessary lands will be provided to the UAE businessmen so that they could develop industries according to their demand and desires.

The Prime Minister said her government set a target so that the country’s electricity generation could be taken to 24000 MW by 2021.

Pointing out the proposed specialised hospital which the UAE wants to establish at Rangunia in Chittagong, Hasina requested the Ambassador to revive the initiative.

During the time, the Prime Minister also requested the UAE government for signing an MoU on visa exemption for the diplomatic and official passport holders to further enhance government-to-government cooperation.

In reply, the UAE Ambassador said the issue will be discussed at a meeting of the Foreign Ministers of Bangladesh and the UAE to be held in February next.

Dr Saeed Bin Hajar Al Shehi informed the Prime Minister that during his tenure in Bangladesh, three agreements - one on Air Services, one on security cooperation and another on transfer of convicted persons -- have been signed between the two countries.

Besides, two Memorandum of Understandings (MoUs) were signed between the countries at that time, he said.

The Prime Minister thanked the outgoing UAE Ambassador for his pro-active role in taking the bilateral ties to a new height.