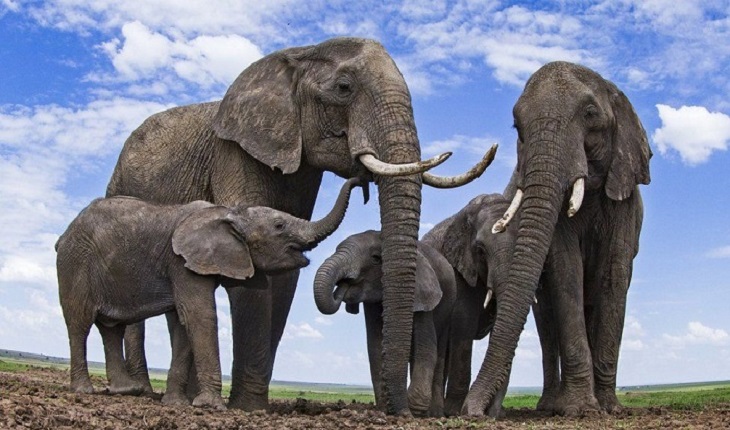 At first, the satellite images appear to be of grey blobs in a forest of green splotches - but, on closer inspection, those blobs are revealed as elephants wandering through the trees.

And scientists are using these images to count African elephants from space.

The pictures come from an Earth-observation satellite orbiting 600km (372 miles) above the planet's surface.

The breakthrough could allow up to 5,000 sq km of elephant habitat to be surveyed on a single cloud-free day.

And all the laborious elephant counting is done via machine learning - a computer algorithm trained to identify elephants in a variety of backdrops.

"We just present examples to the algorithm and tell it, 'This is an elephant, this is not an elephant,'"Dr Olga Isupova, from the University of Bath, said.

"By doing this, we can train the machine to recognize small details that we wouldn't be able to pick up with the naked eye."

"It has a high density of elephants," University of Oxford conservation scientist Dr Isla Duporge said.
"And it has areas of thickets and of open savannah.

"So it's a great place to test our approach.

"While this is a proof of concept, it's ready to go.

"And conservation organizations are already interested in using this to replace surveys using aircraft."

Conservationists will have to pay for access to commercial satellites and the images they capture.

But this approach could vastly improve the monitoring of threatened elephant populations in habitats that span international borders, where it can be difficult to obtain permission for aircraft surveys.

The scientists say it could also be used in anti-poaching work.

"And of course, [because you can capture these images from space,] you don't need anyone on the ground, which is particularly helpful during these times of coronavirus," Dr Duporge said.

"In zoology, technology can move quite slowly.

"So being able to use the cutting-edge techniques for animal conservation is just really nice."