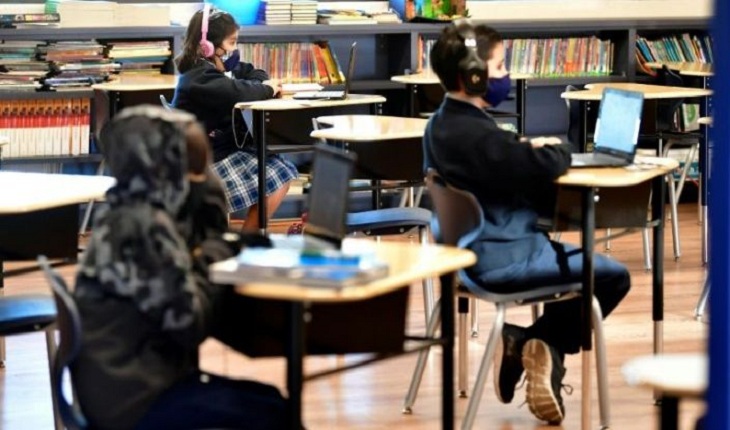 From lawsuits in San Francisco to threats of a remote learning “lockout” in Chicago, US officials are ramping up the pressure on teachers and their unions to reopen schools that have been closed for almost a year due to Covid.

Education professionals are fighting back, insisting that the dangers of sending teachers — many elderly and at-risk — back to classrooms alongside hundreds of students is too great until vaccinations are completed.

The row has escalated amid mounting frustration from parents forced to stay home some 11 months to look after children, and multiplying examples of school dropouts and psychological issues especially in disadvantaged communities.

This week, the American Academy of Pediatrics’ southern California chapter joined a growing chorus calling for immediate reopenings. “A large majority of the 1.5 million students in L.A. County has not been physically in a classroom in nearly a year,” it said in a statement.

“This sad consequence of the pandemic should be addressed immediately with the reopening of schools.” Keeping children out of class does more harm than good, even in Covid times, the branch representing some 1,500 health workers said.

On Wednesday, new US federal health chief Rochelle Walensky reiterated the point at a White House press briefing. “Vaccinations of teachers is not a prerequisite for safely reopening schools,” said the Centers for Disease Control and Prevention director, pointing to “increasing data” showing it is safe to so do.

Children under the age of 12 do not appear to transmit the coronavirus as readily as adults, while their symptoms tend to be less severe, many experts now say. “The consensus now is that reopening schools does make sense,” Eric Toner, a Johns Hopkins Center for Disease Control specialist, told the Los Angeles Times.

But that “consensus” is disputed by many education workers on the ground, including the 300,000-member California Teachers Association.

“No one wants to be back in classrooms with students more than educators, who know there is no equal substitute for regular in-person learning,” spokeswoman Claudia Briggs told AFP. “For that to happen, there must be multilayered safety measures in place,” including adequate ventilation, smaller class sizes, testing and tracing programs, she said.

“School districts have made very clear that they do not have the resources,” Briggs added, pointing to a lack of funding. Concerns have been amplified by the rapid spread of new, potentially more contagious variants of the virus in the United States.

“For these and the myriad reasons, we have to get shots in the arms of all employees who are required to report in-person and before the students return to campus,” said Briggs.

In the absence of any centralized order, the status of school reopening varies hugely between US states, and between public, private and religious school types.

But an estimated half of the 55 million US school students are still to set foot in a classroom, 11 months since the coronavirus forced schools to close nationwide.

In Chicago, the nation’s third-largest school district, teachers and the city council are locked in battle, threatening strikes and a “lockdown” of remote learning systems respectively.

Mayor Lori Lightfoot has warned the ongoing turmoil is causing “catastrophic disruption to the school system.” Lawsuits against schools and teacher unions are multiplying across the country.

This week San Francisco sued its own school board, which is independently elected and is resisting reopening even as 90 percent of classrooms in neighboring Marin County have returned.

“More than 54,000 San Francisco schoolchildren are suffering. They are being turned into Zoom-bies by online school. Enough is enough,” said City Attorney Dennis Herrera.

President Joe Biden, upon taking office, said he wants most schools to be ready to reopen by the end of April, setting aside $130 billion under his plan to combat the pandemic.

But the plan has yet to be adopted by Congress, and vaccination programs look set to take far longer — meaning that, if teachers remain opposed, Biden’s timetable could be in jeopardy.